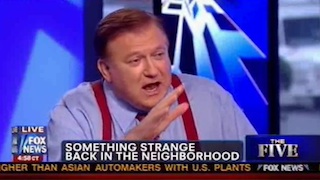 Fox News’ The Five was running down the clock on their last episode of the week this afternoon and Eric Bolling decided to kill time by discussing the theatrical rerelease of Ghostbusters. I’m not exactly sure what conversation that scintillating news story was supposed to inspire (and I write that as a lifelong Ghostbusters devotee), but I certainly wasn’t expecting this. Apparently both Bob Beckel and Andrea Tantaros are haunted.

Pull your blanket tight and get your Smores ready, here’s Beckel’s story:

GUTFELD: I think that was your dealer, Bob.

BECKEL: No, my dealer didn’t look like that. They were talking old English, they were rocking in these chairs. I’m not kidding you!

Once he was done, Tantaros started describing the “old lady” who appears on her building’s security camera footage late at night. Come on, Andrea! Just because your neighbor’s old doesn’t mean she’s not allowed to hit the late night club scene!

Seriously though, if The Five somehow morphs into a Ghostchasers-style reality show about Beckel and Tantaros wandering around the Fox News basement with flashlights, we’re just gonna start posting the entirety of every episode.