President Obama: “Are there people out there who don’t like me because of race? I’m sure there are.”
video

President Obama: “Are there people out there who don’t like me because of race? I’m sure there are.” 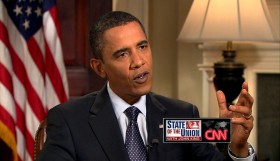 President Obama is doing the Full Ginsburg (well, El Completo Ginsburg, since he’s going on Univision instead of Fox) this Sunday — five Sunday talk shows — but that really starts now in a series of pre-taped sit-downs with the Sunday show hosts. First to land in my late-Friday Rosh Hashanah inbox: ABC’s George Stephanoploulos and CNN’s John King. Because who can wait for Sunday anymore?

Here’s what Obama told Stephanopoulos: “Are there some people who don’t like me because of my race? I’m sure there are.”

Here’s what Obama told King: “Are there people out there who don’t like me because of race? I’m sure there are.”

That’s not to say that he didn’t say other stuff, but let’s put it this way: Don’t worry if you don’t manage to catch all the interviews. You’ll probably be fine.

Stephanopoulos likened his interview with Obama to a “speed date” and said they covered health care, taxes, ACORN, Afghanistan and Jimmy Carter‘s comments (see above); King’s interview, according to CNN PR, covers health care debate, the economy, and “how his family is preparing for the potential H1N1 flu pandemic.” Oh, also Jimmy Carter’s comments.

Extra point for King in eking out a Ronald Reagan reference (ah, remember those early Republican debates? How they all loved Ronald Reagan! Made for some excellent drinking games. Remember how crazy everyone went when Obama told the Iowa Independent that he admired Reagan? Wow. We were all sort of nuts in January 2008. And we hadn’t even met Sarah Palin). Anyhow, here’s what Obama said about Reagan, and FDR, too:

I still think “socialist” is a code word, based on how often it’s been used in the context of things that have nothing to do with socialism. But those of you who use it directly and are merely afraid of Obama’s government hands on your Medicare, well then, never mind.

CNN’s got the picture, but ABC’s got the video. Enjoy.