‘Are You Happy?’ Zimmerman Juror Reacts to Detainment on MSNBC 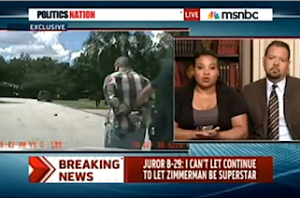 Juror B29, also known as “Maddy,” made her first major television appearance with Al Sharpton Tuesday afternoon since she first revealed her face and spoke to ABC News’ Robin Roberts about her conflicted feelings on the George Zimmerman verdict. Maddy offered her reactions to Zimmerman’s recent detainment in connection with a domestic dispute involving his estranged wife and father-in-law.

After viewing dashcam video of Zimmerman being put in handcuffs by officers, Maddy told Sharpton, “it hurts a lot,” because she keeps going back and thinking “what could I have done” to change the outcome of the trial.

At the same time, she said she sees the futility in rehashing the trial over and over again. “I can’t continue to give George Zimmerman all that power, where he continues and everybody keeps talking about him,” Maddy said. “Let’s talk about what we could do to change to make a difference, to do something. Because that’s what I want to do.”

Maddy, who appeared with her lawyer, insisted that she was not looking for her “15 minutes of fame,” adding, “This is not something you want to be famous about.”

“I’ve always said George Zimmerman, basically George Zimmerman is a murderer,” she said, echoing comments she had made to Robin Roberts. But at this point, she said, “the only person that’s going to deal with it is God.” She said, “As you see his anger, which [his wife] Shellie was expressing that he had anger problems, it’s showing right now. And all we could do is let him fall on his own.”

Asked by Sharpton what she would say to Zimmerman now, Maddy had a simple question. “Are you happy?” she said she would ask him. “Because, I don’t understand how someone could continue to keep a smile like that with all of the hurt he has caused.”