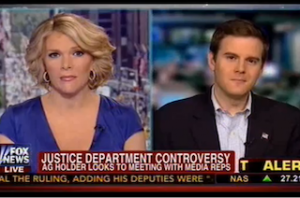 With more and more media outlets, including Fox News, opting out of Attorney General Eric Holder‘s off the record meeting with Washington bureau chiefs this week, Megyn Kelly opened her show this afternoon by questioning just what the Justice Department was thinking by trying to keep the session under wraps. Speaking for her fellow journalists, Kelly said, “we are news organizations and we get paid to shine a light into dark corners, not to keep the public in the dark.”

Townhall.com editor Guy Benson joined Kelly for the discussion, saying the whole thing would be “laugh out loud funny” if the stakes weren’t so high. “I mean, are you serious?” Benson asked. “You must be joking and Fox News among others, The New York Times included, aren’t laughing.”

“The whole thing is a complete farce,” Benson continued. “It’s embarrassing that they even made this request to begin with. They have been slapping the press in the face, unbeknownst to the press now, for a number of years.” He predicted that the subpoenas might “start flying again” if any of the off the record information ends up getting published to see “who leaked what to their own employees.” On the news outlets that do plan to participate in the meeting, Benson asked, “what are you thinking?”

Kelly remarked that it’s not every day Fox News finds itself “shoulder-to-shoulder” with The New York Times and The Huffington Post, “but that is where we find ourselves, because it’s a matter of journalistic ethics now and whether we should be agreeing to have this behind closed doors, off the record, come to Jesus discussion with the attorney general, who is alleged to be the wrongdoer. It’s not like he is some impartial person and wants to come in and say let me clean it up and you guys help me clean it up.”

Benson offered up a novel alternative to Holder’s planned meetings. “How about on the record, nationally televised interview with James Rosen,” Benson suggested. “And James Rosen can ask him the questions such as, why did you want to see my personal emails? Why did you tell Congress explicitly that you never even heard about something like this happening when, in fact, you did it yourself?”

Megyn Kelly’s laughter at Benson’s suggestion indicated just how unlikely show thought that show of “transparency” would be.