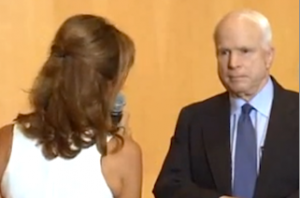 Sen. John McCain (R-AZ) came face-to-face with his constituents Thursday during a tense town hall event in Phoenix, Arizona. The senator, who has perhaps been the loudest Republican voice supporting military action in Syria met voters who were vehemently opposed to intervention and let their voices be heard.

According to a report by CNN’s Kevin Liptak, one man told McCain, “We didn’t send you to make war for us. We sent you to stop the war,” drawing applause from the crowd. Another man held up a bag on marshmallows, telling him, “This is what I think of Congress. They are a bunch of marshmallows. That’s what they are. That’s what they’ve become. Why are you not listening to the people and staying out of Syria? It’s not our fight.”

Videos captured at the event show McCain contending with the often angry crowd. At one point, a man repeatedly attempted to interrupt McCain mid-speech, causing the senator to stop and address him. “What you’re doing is not just disrespectful to me, but disrespectful to others who want their opinions and views heard.”

Later, a woman who said she had a young cousin living in Syria delivered an emotional plea to McCain. “For me, to listen to you say there is no good option in Syria-–I refuse to believe that,” she told him. “The good option right now is to take Saudi Arabia and Iran and force them to stop supporting the two sides in Syria. And you could do it. You can do it by diplomacy, not bombs, Sen. McCain. We cannot afford to shed more Syrian blood.”

McCain thanked the woman, who got loud support from the crowd, for her “emotional plea,” but disputed what he saw as her support for the Assad regime. “To say that Bashar Assad is anything but a merciless butcher, then we have a strong disagreement.”

Watch the two exchanges in the video below: