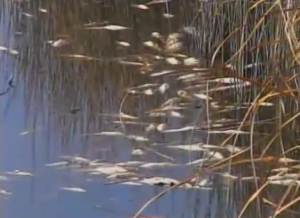 And, so, the Four Horsemen of the Apocalypse continued their fun tour of the United States. They’ve left the midwest and have now headed to the East Coast as folks in Maryland discovered two million dead fish floating in the Chesapeake Bay. Of course, experts are positing some plausible explanations for the phenomenon, but they’re mostly boring so, naturally, we’re going to connect it to all the other dead animals and remind everyone that WE ARE ALL GOING TO DIE!!!!

Oh, fine. I guess you want to know what the scientists have to say. Fiiiiiiine…

“Maryland Department of the Environment spokeswoman Dawn Stoltzfus told Sky News Online that at the moment it does not look like pollution is to blame.
She said: “The dead fish are mainly juvenile spot fish, and they can’t survive very cold water temperatures. Typically they should have left the bay by now.
‘Our working theory, that looks pretty strong, is that it’s been caused by cold water stress.'”

Ugh. So a bunch of fish just got caught in the bay and couldn’t make it out to other areas before the water chilled? That is sooooo dull. And scientists are also trying to explain the other deaths away with power lines and fire works? Could that be any more boring? It totally doesn’t make my life sound like the beginning of a Steven Spielberg movie and therefore it’s stupid and I hate it.

Those scientist buzz kills can continue to try and ruin everything but don’t worry. We in the media promise to continue to bravely connect these events and hope for an apocalyptic even that will kill us all. It’s just so much more fun that way.

Watch the news report on the latest mass kill from Sky News below: