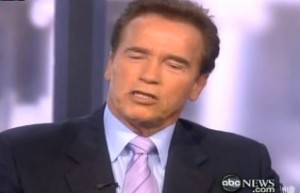 MORAN: Governor Schwarzenegger, is the Republican Party, your party, the party of no right now?

MORAN: So they are the party of no.

But that’s only the case in California. That’s not only the case in America. That’s the case all over the world. If you read six newspapers from different parts of the world, you will see the headlines are pretty much the same. They’re all angry at their leaders because the economy is down and the world basically has one-third less wealth right now. And so that makes people angry.