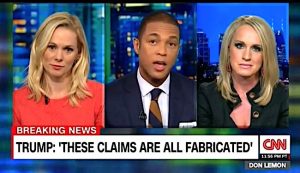 During a heated discussion between a CNN contributor and a Donald Trump supporter, Don Lemon got deeply personal over the accusations that the mogul sexually abused multiple women.

The accusations were the subject of a spirited discussion between Margaret Hoover and Scottie Nell Hughes, where they argued over whether there are holes in the Trump accusers’ stories, and why they waited until now to go public. Lemon compared the situation to Bill Cosby‘s downfall, stating that one possibility was that these women felt intimidated by Trump’s wealth and prestige, and that they feared their accusations wouldn’t be seen as credible.

Hughes argued that Cosby’s accusers had evidence to back their allegations where Trump’s accusers do not. Hughes went on to complain about how much media conversation went towards the women, and that Trump’s alleged sexual assault is not more important than the WikiLeaks release of John Podesta‘s emails.

Lemon did not approve of Hughes’ take on the assault allegations, and he wasn’t shy about it:

“I have to say that’s really insulting, especially as someone who is a survivor of sexual abuse and who is a product of a single mother and was raised with all sisters and aunts and who looked after me. I would say this is a very important issue in American society right now and we should be discussing it in a more substantive way.”

Lemon is a victim of sexual abuse. In 2010, he admitted he was molested by a pedophile.