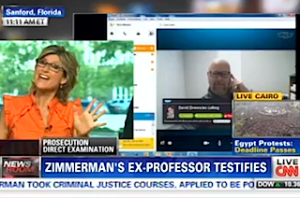 Mere moments after a military deadline for Egyptian President Mohammed Morsi to step down had passed, what was happening on America’s premier 24-hour breaking news network? Viewers who wanted to know what was happening in Cairo could see a tiny box in the corner of CNN’s screen showing a wide shot of the hundreds of thousands of protesters amassed in Tahrir Square. But the main event was a technically-challenged Skype testimony in the George Zimmerman murder trial.

CNN did briefly cover what should be the major story of the day when the Zimmerman trial took a short, 15-minute recess. But as soon as court was back in session, CNN followed suit, with anchor Ashleigh Banfield saying how excited she was to watch a witness testify via Skype. “I don’t think I’ve ever seen someone standing at the lectern with a smartphone,” Banfield remarked. “Listen, it’s 2013, we talk on the run, we talk at the bus stop, some people talk on the way to the bathroom.”

From there, CNN aired four solid minutes of Skype testimony from a former professor of George Zimmerman‘s, which was repeatedly interrupted by pop-ups on his screen of people who evidently saw him testifying on TV and decided to try calling in. Suffice it to say it was neither an effective way to deliver testimony, nor was it compelling television news.

Finally, the whole thing got so ridiculous that Banfield cut in and started explaining how Skype works to viewers who might not be familiar with it. “I think all of these people are calling either the prosecutor or they’re calling the witness to say, ‘Dude, I see you on TV,'” she reported through laughter. “I’m only laughing because I had this happen to me before.”

Legal analyst Jeffrey Toobin joined the discussion, laughing as well at the absurdity of the situation. “It’s ridiculous,” he said. “it’s actually a good thing to be able to use Skype. It gives you access to people who may be unable to come to court, but, you know, because the trial is televised, I assume these are just people who want to make trouble.”

Instead of using the technical difficulties in the Zimmerman trial to check in on how Egypt is fairing in their moment of enormous upheaval, Banfield and Toobin spent the next several minutes reviewing testimony from earlier in the day. Before cutting to commercial, Banfield assured CNN’s viewers that they “won’t miss a moment of the testimony.” At the very last second she seemed to remember that something was going on in Egypt as well, but in a symbolic, telling moment she was cut off by the commercial break before she could finish her sentence.

CNN is certainly not alone in putting the Zimmerman trial above all other news. Fox and MSNBC have been relentlessly covering the proceedings, especially during this holiday week, which, until Egypt started to erupt in protest again, was relatively devoid of other major news. But while those two channels’ dedication to American “politics” could be seen as an excuse (if you consider the trial political to begin with), how can CNN maintain its desired role as the one and only destination for breaking news if it barely covers the biggest breaking story of the day at the height of its action? And with sister network HLN also completely devoted to “gavel-to-gavel” Zimmerman coverage, shouldn’t that allow CNN the opportunity to cover the bigger picture?

With MSNBC chief Phil Griffin admitting his network is “not the place” for breaking news and CNN head Jeff Zucker insisting his is interested in doing “much more” than his cable news rivals, there is no reason why CNN viewers had to sit through this much coverage of a failed Skype call.