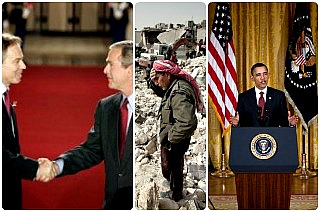 How do you know that the run-up to war in Syria is eerily similar to the run-up to the Iraq War? Liberal journalists keep reminding you of the many ways in which they claim it is not.

Aside from the 22 months of discussion, debate, case-making, and constitutional authorization that preceded the invasion of Iraq, the run up to Syria intervention is remarkably similar with one exception – the international coalition that invaded Iraq alongside the United States is not there. In an effort to absolve President Barack Obama of responsibility for failing to assemble broad and participating coalition, reporters who support the president must abandon the presentation of evidence and resort to mockery and disdain.

New York Times reporter Annie Lowrey engaged in the unforgivable offense on Friday of giving voice to the empirical fact that the White House will be practically “doing this alone.” She said that, more than two years into the civil war in Syria, one year after Obama established a “red line,” and three months after his administration confirmed that red line had been crossed, they “didn’t even lay the groundwork” to assemble an international coalition which would participate in the intervention.

This undeniable failure on the part of the Obama administration, having been acknowledged, could not stand without pushback. The unfavorable comparison of Obama to Bush must be invalidated – any defender of a frail and crumbling worldview would do the same. Enter, Huffington Post reporter Sam Stein.

This was not so much analysis as a flailing effort to derail and redirect the conversation away from its natural course — criticism of the president.

Stein was not alone. TIME Magazine’s Jay Newton-Small penned a post for that magazine making the case for why “Syria 2013 Isn’t Iraq 2003.” In an interview on CNN, she mocked the Micronesian nations who served in a support capacity in Iraq. She added that Australia, France, and Turkey lend “legitimacy” to the mission to the mission in Syria in a way that Bush’s coalition did not.

No longer was the Iraq coalition too small, as was noted so often in the run-up to war by liberal opponents of the invasion, today the thinking is that it was not comprised of nations with a subjective degree of stature.

While nearly 50 states participated in some way in the invasion of Iraq, only three nations served in a combat role during the invasion: America, the United Kingdom, and Poland. A coalition of 37 nations contributed troops to oversee the occupation and reconstruction of post-war Iraq.

And while America did not have the support of Turkey or France in 2003 (though Australia did serve as a member of the coalition), it will not intervene in Syria with the support of its historical allies Britain or Poland. Indeed, relations with Britain and Poland are today measurably worse than they were in the Bush years.

Many have chronicled the dismissive and antagonistic way in which the Obama administration handled the “special relationship” with the U.K. in his first term. The president supported Argentina’s rhetorical claim by calling the Falkland Islands “the Maldives.” (He meant “Malvinas,” the Argentinian word for that South Atlantic Island chain). Obama said America has no stronger friend and ally than France. He made a showy display of returning the bust of Winston Churchill to the British Embassy and removing a replica of that bust from the Oval Office to the residency.

In a more substantive way, Obama damaged relations with the U.K. by revealing sensitive intelligence to the Russians about the British nuclear deterrent in order to persuade Moscow to sign a new START treaty over London’s objections.

Pandering needlessly to the Russians is how Obama alienated Poland as well. In 2009, in an effort to invigorate the disastrous “reset” of relations with Russia, Obama abandoned a treaty with Poland and the Czech Republic which would have provided them with defensive missiles and radar. This was another offense which resonated in Warsaw more than Washington, and damaged America’s close relationship with all the former Warsaw Pact nations.

But Obama has France, a nation which is always prepared to intervene in its former colonial possessions and nearly nowhere else. America has the support of Syria’s neighbors as well, threatened by a growing refugee problem. And, of course, Obama’s biggest support will come from journalists, eager to protect their creation from the results of his actions.

Among the many empty promises that Obama’s supporters insisted would be fulfilled upon the president’s ascension to his high office in 2008 was a repair of America’s relations with the international community. They promised that Bush’s excesses and “cowboy” attitude had alienated America’s allies and made rapprochement with its adversaries less likely. Today, it is clear those were empty and aspirational statements.

In spite of pronouncements from partisan reporters, the reality is self-evident: a competent policy of foreign affairs is difficult for any White House to achieve, but Bush – for all his faults — was a far better executor of American interests abroad than Obama has been.