As Liberals Celebrate Chaos In The GOP, Some Democrats Warn Of Trouble On The Horizon
video

As Liberals Celebrate Chaos In The GOP, Some Democrats Warn Of Trouble On The Horizon 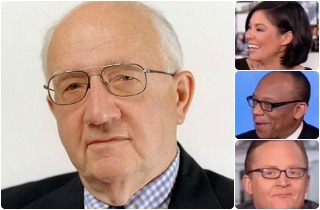 There is no better window into the mindset of the Democratic Party’s loyal yet liberal wing than MSNBC’s panel program Now with Alex Wagner. At the close of the annual Conservative Political Action Conference and amid a report released by the Republican National Committee examining the GOP’s 2012 loss, it is understandable that Now’s guests would drink in the opportunity for schadenfreude presented by the chaotic post-2012 GOP. But some seasoned Democratic operatives are warning that the party faces a problematic midterm election and that it is the DNC that will be authoring remorseful postmortems come 2015 if the party does not recognize their folly and correct for it soon.

“We’ve seen a messy Republican Party over the course of the last seven moths, but the coming – the sort of head-to-head at CPAC I thought was the strongest and starkest example of the challenges the party faces that we’ve seen in a very long time,” opined Wagner.

“Whenever you describe how the campaign went wrong as your ‘autopsy,’ that’s probably not the best way to begin,” said former White House Press Secretary-turned-MSNBC contributor Roberts Gibbs. “Note to the scheduling department at the RNC; try not to schedule the autopsy’s verdict for the day after the bar scene from Star Wars that is CPAC.”

Wagner and her panel had a hearty chortle over the futility of the RNC’s plan to dispatch outreach advisors to minority communities in an effort to identify conservative leaders within those communities – a plan that respected Democratic pollster Anna Greenberg reacted to by saying “this will work.” Armed with partisan editorials penned by the Democratic Party’s predictable cheerleaders, the panel guests dismissed the RNC’s outreach effort in total.

Short of becoming Democrats, the Now panel’s verdict was clear: the GOP is doomed. If that’s what you came here for, dear viewer, consider yourself served. But if only something with slightly more nuance and depth will satisfy your political tastes, it seems that not every Democrat is gleefully celebrating the inexorable decline of the Grand Old Party.

“As a lifelong Democrat, I have a mental picture these days of my president, smiling broadly, at the wheel of a speeding convertible. His passengers are Democratic elected officials and candidates. Ahead of them, concealed by a bend in the road, is a concrete barrier,” writes Democratic strategist Ted Van Dyk in the Wall Street Journal on Sunday.

Defying the odds, Mr. Obama did become the first president since Franklin Roosevelt to be re-elected with an election-year unemployment rate above 7.8%. Yet his victory wasn’t based on public affirmation of his agenda. Instead, it was based on a four-year mobilization—executed with unprecedented skill—of core Democratic constituencies, and on fear campaigns in which Mitt Romney and the Republicans were painted as waging a “war on women,” being servants of the wealthy, and of being hostile toward Latinos, African Americans, gays and the middle class. I couldn’t have imagined any one of the Democratic presidents or presidential candidates I served from 1960-92 using such down-on-all-fours tactics.

Van Dyk warns Democrats to get ahead of the issue of tax code and entitlement reform and to buck progressives to the left of Obama warning against any pro-growth reforms. Van Dyk cautions that Democrats should not let themselves be forced into a position where they have to follow Republicans’ lead on reforms after what history portends will be a poor showing for the president’s party in the coming midterm elections.

In June of 2009, Van Dyk wrote a mild criticism of the president’s leadership style for the WSJ. Amid flattering comments about president’s campaign and the grandness of the opportunity his popularity afforded him, Van Dyk proposed a handful of adjustments the president could make which would help him become an even more effective executive. Among those recommendations were to rein in his over-zealous Chief of Staff, Rahm Emanuel, and to scale back his “proposals and expectations.”

Van Dyk was correct. Obama’s legislative overreach was corrected by the voters in the historic 2010 midterm wave election which obliterated a Democratic House majority cobbled together over the course of two pro-Democratic waves. But Van Dyk’s critics on the left, stung a tepid critique of Obama authored by one of their own, struck at his credibility and sought to undermine his authority.

“Who the heck is this guy?” asked The New Republic’s Barron Youngsmith in 2009. “[A] Nexis search reveals that he has been posing as an “enraged Democrat” abandoned by Democrats since at least the Carter administration. Liberals should dissent, of course, but this guy is just ridiculous.”

One should take the time to peruse Youngsmith’s 2009 research on Van Dyk’s work. It turns out that his criticisms of Democrats, particularly in the post-Clinton era, were strikingly on point.

Expect Van Dyke to be similarly pilloried by the left again. His criticism of Obama today is far less measured than it was in 2009. That level of dissent demands a pushback.

That is, if Van Dyk even merits acknowledgement by the liberal commentary class. When Democrats are in the midst of a self-congratulatory escapade as they are today, why allow one prescient critic to spoil all the fun?