As MHP Saga Proves, Cable News Hosts Always Forced to Take One for the Team 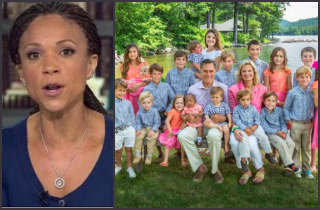 It’s all part of the contract, and those who are talented or lucky enough to land in the big chair are paid handsomely to do the job. But with great power comes great responsibility, and unlike your average superhero who usually acts alone (with respect to Robin and the Ambiguously Gay Duo), cable news hosts are dependent on a team that can run anywhere up to 20-40 people deep.

With dependency comes trust, which can deplete quickly when mistakes or poor judgment begin to add up. And when those errors happen—particularly the biggies that go viral and get discussed on other networks—the only person out there taking a beating is the face of the show.

To that end, MSNBC’s Melissa Harris-Perry dominated the media analysis landscape last week. Fox’s Megyn Kelly held that dubious throne two weeks prior. MSNBC’s Martin Bashir and Alec Baldwin were big on the scene around Thanksgiving. Fox’s Anna Kooiman became a human piñata in October. CNN’s John King took the brunt of criticism (that should have been shared with the AP, Boston Globe and Fox) during the Boston Bombings. No need to review what was said or done by each of them here, or whether it was right, wrong or overblown…that’s been debated enough for anyone’s taste. It also isn’t the purpose of this column.

Instead, using the Harris-Perry controversy as a playbook, let’s break down the following:

Saturday, December 28th: It’s a slow holiday weekend and Washington is basically shut down due to vacations for the President and Congress alike. But Harris-Perry still hosts a 120-minute show the following day and therefore needs to fill 12 blocks of programming somehow. What happens from here is murky, but based on my experience as a national cable news writer and producer, here’s an educated guess:

The day prior to the Sunday MHP show, the Executive Producer (Eric Salzman) gathers his team in a conference room to discuss what topics will make the final cut for the program. During busy weeks at MSNBC (or CNN or Fox), blocks A-F (one hour) can sometimes practically fill themselves.

For example, at the climax of the Zimmerman trial, MSNBC blocks A-C were largely filled with trial news and panel commentary alone. D and E blocks would cover big or quirky political stories, which almost always are panel discussions as well (as Pew Research points out, 85 percent of MSNBC programming is opinion, which is fine…that’s the business model). The F Block is generally a quick 1-2 minute throwaway or final word segment since the first five blocks eat up most of the show.

So in the case of the Romney-adopted-black-baby-segment, producers saw they didn’t have any huge stories to help fill the show, thereby allowing more creative, outside-the-box pitches to be considered. One by one around the table, Associate, Segment and Senior Producers (and even interns if present) spitball 1-2 ideas around what they feel warrants consideration. The Executive Producer listens to each and either rejects them on the spot or puts them in a “maybe” or “yes” category (the “maybes” are invariably decided by a Senior and Executive Producer afterward). The EP and Senior already have a good idea what the lead blocks (A and B) will be before this session takes place. The later blocks? Very much open to debate…

So who pitched the Romney Christmas Card idea as a topic of discussion? Only those in that pitch meeting know. Could Harris-Perry have offered it up herself? Maybe, but given all of the other voices in the room, the odds are she didn’t. But as mentioned earlier–at least to those at home or to others in the media–Harris-Perry owns it regardless because, like Obamacare with the President, her name is attached to the program.

Having said that, one other note: If an anchor/host is sitting in a pitch meeting—and almost all do—they usually have complete veto power on any EP-approved pitch. They’re the highest-paid, least-expendable person on staff, and it’s therefore the job of the rest of the team to make him or her comfortable with whatever is planned.

But that’s where the raw deal kicks in for Harris-Perry: She almost certainly didn’t book the guests present on the panel (which included a singer and a comedian) who caused most of the trouble. She clearly didn’t anticipate the segment going into the gutter as quickly as it did. Then again, nor did she attempt to get the conversation under control.

And therein lies the rub: The inherit risk that comes when putting a relatively inexperienced broadcaster into the big chair to host a national (and oftentimes controversial) opinion program on a weekly basis. Remember, Harris-Perry had never hosted a program in this format or level until 2012 (she’s a full time professor at Tulane).

Given the editorial culture at MSNBC (which is generally dictated by ridiculing Republicans and playing the race card on a daily basis), it’s almost certain after the Romney segment was over that no one, NO ONE on set or in the control room knew what kind of firestorm had just been created. For if that was the case, apologies from Harris-Perry would have come via Twitter immediately, and not two days after the clip went viral in a very negative way. It should also be noted that the EP (Salzman) retweeted a tweet that day that indicated the show was trending in the United States (See: No remorse at the time).

So when pointing the finger at Melissa Harris-Perry for another tasteless footnote in cable news history, and there have been many, just remember this:

Salzman didn’t get in Harris-Perry’s ear during the segment when things got ugly asking her to get said panel under control.

Harris-Perry didn’t bother to share with the audience that she came from a racially-mixed family when introducing the segment, nor did Salzman believe letting that tidbit known during the intro may have been a good idea.

And in the end, all responsibility fell on Harris-Perry’s shoulders, which she accepted. She apologized twice. Mitt Romney accepted on behalf of the family, and that likely–and thankfully–is the last we’ll hear of it.

But she shouldn’t be the only one pleading for forgiveness.

MSNBC management hasn’t apologized on behalf of the network to the Romneys. Harris-Perry may own the segment, but management owns Perry and all content on the network.

EP Eric Salzman has been silent on places like Twitter as well, which is like a head coach skipping a postgame press conference after a big loss, only to allow his quarterback to face the music alone.

Before her apology–which was genuine–Harris-Perry deserved blame, but certainly not all of it.

Because while it may look like a television anchor or host is calling all the shots for the cable news program you’re watching.

The spelling errors. The wrong video cued up. The wrong script in the prompter. A satellite or Skype interview going down.

The only person who looks foolish or forced to apologize is the one seen on camera.

Not the dozens of people who may be responsible behind it…