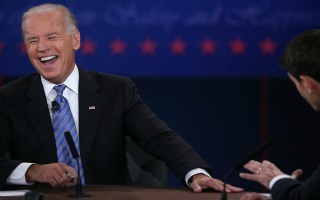 It remains to be seen how many viewers tuned in for last night’s vice presidential debate. The snap polls were split – GOP vice presidential nominee Paul Ryan won one, Vice President Joe Biden another. There were moments, more than a handful, where Biden appeared to have his Republican colleague on the ropes. Ryan, deferential and wonky, got his shots in but he landed fewer punches. Biden turned in a workmanlike performance in that his task was to reinvigorate a depressed Democratic base. He probably accomplished that task. As the highs of the moment fade, though, and the sober, morning-after assessments of the debate trickle in, more and more are asking if Biden’s flippant, dismissive display of mock-exasperation with his calm and senatorial Republican colleague will not be recalled fondly by nonpartisan viewers.

Why will Biden’s behavior be the take away from last night’s debate or will there be a more substantive exchange that voters settle on as the defining moment? Ask yourself, what is the take-away line? Was there one? Or, was it like the first presidential debate – that there was a general tone, a demeanor that will form the lasting impression for voters.

The night’s most tweeted line (as metrics go, that one is admittedly lacking) was Joe Biden interrupting Ryan while he explained that a number of prior presidential administrations have cut tax rates to spur growth and arrest recessionary trends. Among those administrations that opted to cut taxes to generate growth, Ryan cited John F. Kennedy’s presidency. “Oh, so you’re Jack Kennedy now,” Biden interjected, recoiling with feigned revulsion.

Will that be the sound bite that gets played ad nauseam over the weekend and during the Sunday shows? Democrats may hope that it is, but they should rethink that. The sound bite reminds voters that Ryan is correct – the revered JFK did cut taxes and his administration did halt the recession of 1960-61 because of that policy.

In all likelihood, the lasting impression will be Biden’s behavior – his theatrical exasperation with his colleague across the debate table. Democrats seem quite certain that New Jersey Gov. Chris Christie’s “bully” act is an utter loser with independent voters, but simultaneously find Biden’s aggression to be just what this moment called for. They are kidding themselves. Al Gore won the first 2000 debate too according to ABC News’ poll until Saturday Night Live lampooned his cartoonish sighing and eye-rolling and formed posterity’s lasting impression of that contest.

Democratic voters will be back in the game after this debate. They found Biden to be willing to fight for their values in a way that President Barack Obama did not in the first debate – but that was a low hurdle to clear. Democratic partisans were always going to show up at the polls on November 6. Biden’s saving grace will be that this debate has a short shelf life. Next Tuesday, the president and Mitt Romney will meet again and memories of the vice presidential debate will fade. Democrats should be thanking their stars for this gift of fate. Joe Biden did the ticket few favors last night.