Ashleigh Banfield Confronts Councilman: I Was ‘Livid’ When You Used ‘N-Word’ on CNN
VIDEO

Ashleigh Banfield Confronts Councilman: I Was ‘Livid’ When You Used ‘N-Word’ on CNN 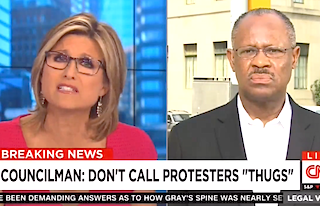 When Baltimore Councilman Carl Stokes appeared on Erin Burnett‘s CNN show Tuesday night, he castigated President Barack Obama and Baltimore Mayor Stephanie Rawlings-Blake, among others, for using the word “thugs” to describe the young men who have been rioting the streets over the death of Freddie Gray. When Burnett protested, he suggested she “just call them niggers” because it essentially means the same thing.

Stokes returned to CNN Wednesday afternoon, this time to speak with host Ashleigh Banfield. Towards the end of their discussion, Banfield thanked the councilman for not using the “n-word” on her program.

“I was watching Erin’s show last night and I was livid,” she told him. “I have to say, you’re a leader and so many people have said don’t say it in rap, don’t say it so loosely, don’t assume you can say it because you’re one color and another color can’t. It’s just so painful to hear it no matter what color we are and I’m glad you decided not to use it on this show.”

Of course, Stokes was not using the word to describe the rioters, but rather criticizing those who used the word “thugs,” which he implied has similar connotations. That message appears to have reached Mayor Rawlings-Blake, who issued an apology of sorts for her use of the word on Twitter Wednesday morning.

And watch Burnett’s interview with Stokes below, via CNN: