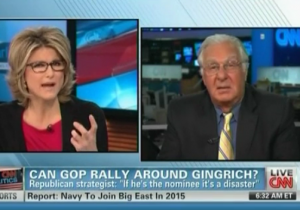 Former Congressman Dick Armey — considered by some to be the “Godfather of the Tea Party” — was a guest on Monday’s Early Start, and faced a line of hard questioning from co-host Ashleigh Banfield about who the Tea Party will end up supporting.

“I think the movement, very broadly,” Armey began, “has forsaken the possibility of having a reliable, innovative, small government conservative emerge through the Republican Party’s process. So we put our focus on — ”

“What do you mean?” Banfield interrupted, “I thought that was Ron Paul, Congressman?”

“Well, Ron Paul, we– we sa– we don’t believe he will emerge, uh, as the candidate through this process,”

“So why aren’t you backing him?” Banfield asked. “And all your very strong Tea Partiers? I mean the numbers are in the hundreds of thousands, if not millions.”

“One of the things you have to understand about small government activists,” Armey explained, “is that we all, each and very one of us, individually, march to our own drummer, so there are many people in our movement that are backing Ron Paul, but there are some that are backing some of the others, as well,”

“But that means you don’t have sort of a block of power, if what I’m hearing is, uh…”

“We’re not about power,” Armey said. “That’s one of the things that’s confusing to a lot of people who are used to analyzing the behavior of real politicians that are in biz for themselves. We are about what’s good for the nation, individual liberty, personal freedom, and everybody being free to do their own thing.”

Armey then explained that it’s looking like no candidate will emerge with 51% of the delegates until the convention, suggesting that someone like Mitch Daniels could jump into the race. He said that it’s likely someone not in the field now could jump in and grab the nomination.

Banfield later asked Armey if it was true, as Mitt Romney has charged, that Newt Gingrich resigned from Congress in disgrace. Armey said it wasn’t true, and that he personally stepped in to prevent a coup against him.