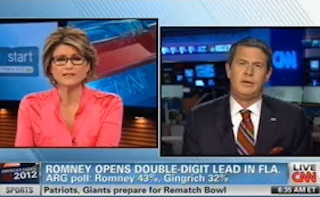 During an awkward exchange on CNN’s Early Start, Ashleigh Banfield grilled Louisiana Senator David Vitter over his prostitution scandal, and compared his affairs to those of Republican hopeful Newt Gingrich. “I want you to weigh in on Newt Gingrich and what it’s like for a politician having serious baggage trying to be elected,” she asked. “The good news is in America, it’s not up to CNN, it’s up to the American people and up to voters,” Vitter hit back, comparing Banfield to John King.

RELATED: Bill O’Reilly: What Sen. David Vitter Did Was Worse Than Anthony Weiner

Banfield acknowledged she knew it was “awkward” for her to even ask him the question, which a clearly gobsmacked Vitter evidently did not see coming.

“That’s going to be the case in this presidential election,” Vitter continued. “I think the voters are going to look carefully at all sorts of issues — but my guess is what concerns them now is this horrible, horrible economy and their future and their struggles around the kitchen table.”

“Well, I appreciate that you say it’s not up to CNN,” Banfield countered. “But I like to say we’re the messenger here, and one of the messages that you gave was this quotation about your incident and you said this was a ‘very serious sin in my past for which I am, of course, completely responsible.’ And that’s why I bring it to you, not so that CNN can dictate how voters will vote but so that we can take your message, including that one, which was kind of a embarrassing thing to admit to as Newt Gingrich has had to admit to some very embarrassing things and have voters take those messages.”

“What I’m asking you is, can you compare the difficulties that you struggled with to a what Newt Gingrich is struggling with?” Banfield pressed.