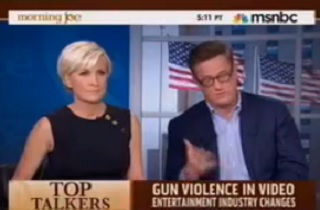 In the aftermath of the Aurora movie theater shooting, Morning Joe host Joe Scarborough outrageously linked mass shootings with Autism Spectrum Disorders (like Asperger’s Syndrome), was sharply rebuked, and issued a lame, off-air non-apology. In the months since the Newtown shooting, it appeared as though he’d learned his lesson, as he held his tongue while other media figures and reporters irresponsibly suggested the same link. Turns out he was just biding his time. On Friday morning’s Morning Joe, the real Joe came out.

Joe Scarborough, who is, himself, the parent of a child with Asperger’s Syndrome, infuriated Autism advocates and other thinking people when, in the days following the devastating massacre in Aurora, Co., revealed that whenever one of these things happens, the first thing he thinks of is Autism. “You have these people that are somewhere, I believe, probably on the autism scale, I don’t know if that’s the case here, but it happens more often than not,” Scarborough said, despite the fact that no evidence exists to support that statement, and evidence suggests, instead, that developmentally disabled people are far more likely to be victims of violent crime than perpetrators of it, and their attackers are overwhelmingly neuro-typicals like Joe Scarborough.

That was before the massacre at Sandy Hook Elementary School, which also touched off a flurry of irresponsible reporting on ASDs, aided by the fact that the Newtown shooter apparently had Asperger’s Syndrome. Again, there is no evidence whatsoever that this contributed, in any way, to his crime, but the media has continued to focus on it anyway. It doesn’t help that law enforcement sources have consistently been leaking information, and highlighting evidence, about the shooter’s ASD, while ignoring the co-pathologies he was alleged to have had. If it’s ever actually confirmed that the Newtown shooter had an ASD (so far, the information has been gleaned through leaks, secondhand sources, and books found in the home), he would be the first.

That fact, however, didn’t stop Joe Scarborough from pre-judging the Newtown shooting, as he revealed Friday morning. “The second Mika and I heard the news that there was a shooting in Connecticut,” Scarborough said, “I said, ‘you watch. This kid is going to have a certain condition, I won’t say it here on the air because people will kill me for saying it.”

Joe obviously sees Newtown shooter Adam Lanza’s alleged Asperger’s Syndrome as a vindication of his previous uninformed slur against people with ASDs, but the sick cruelty of that slur is embedded right there in Scarborough’s statement, that “people (presumably the autism advocates he ignored last time) will kill me ” if he says it on the air. Aside from the fact that if Joe Scarborough is ever killed, there’s a 95% chance it will be by a neuro-typical person, two of the victims of the Newtown massacre were children with Autism Spectrum Disorders. When Joe Scarborough slurs people with Autism, he’s slurring his own son, and he’s slurring Dylan Hockley and Josephine Gay, who were six and seven years old when they were murdered.

Here’s the thing, though. Like Joe Scarborough, I’m a parent of two children on the Autism spectrum, but I don’t think this makes me an expert on the condition. When Scarborough first made his assertion, back in July, I was angry, but the first thing I did was to scour all of the available research on the subject, to see if there was even a scintilla of truth to it. Just because I don’t like a fact doesn’t mean it’s not true. But in this case, it wasn’t true. When this narrative resurfaced after Newtown, especially given the news of Adam Lanza‘s alleged ASD, I scoured the research anew. One of the biggest flaws in research attempting to draw a link between autism and violent crime, though, is that many such studies ignore co-pathologies present in offenders, and that appears to be the case with Adam Lanza. In other words, the few people with ASDs who do commit violent crimes almost always have something else wrong with them, which has been the case with reporting on Lanza, but law enforcement and the media have avoided reporting on the co-pathologies in any detail, while focusing, without cause, on the ASD.

What makes this time worse is that Joe Scarborough knows better, he has seen all of the evidence, yet he retains his irrational prejudice against people with ASDs, and spreds them to his highly-influential audience. He shouldn’t worry about people “killing” him for expressing it, he should be worried about the harm he is doing to people who already have it hard enough.