Assad Advisor Goes on Fiery Rant: You Think the U.S. Is Any More Democratic Than Syria?
video

Assad Advisor Goes on Fiery Rant: You Think the U.S. Is Any More Democratic Than Syria? 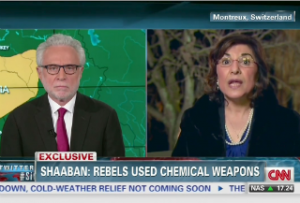 In the current international negotiations over the Syrian conflict, U.S. Secretary of State John Kerry made it clear that current president Bashar al-Assad will not have a role in any new transitional government. So when Assad advisor Bouthaina Shaaban appeared on CNN Wednesday to react to the news, she went on a strong rant against Kerry, asking where he gets the right to tell the Syrian people who can and cannot be their leader. She suggested the shoe would never be on the other foot, called the U.S.’ stance “colonial,” and asked, “Do you think there’s real democracy in the United States when they deal with countries like this?”

Wolf Blitzer brought up some graphic pictures that appear to depict victims of the Assad regime, pictures obtained by CNN’s Christiane Amanpour. Shaaban fired back that “you really have to be in Syria to know who’s doing what,” not judging from a distance like, she said, Amanpour was doing. She called the accusations a “huge lie” meant to “create conflict” and undermine the Syrian government.

Shaaban called out “one man in the United States who’s misleading” about Syria, but when pressed by Blitzer, she said, “I’m not going to name him, everybody knows him.”

She encouraged the media to come to Syria so “you will find out for yourself who is the criminal; who is kidnapping people, who is raping people.” She insisted that “most of what’s circulated in the media has nothing to do with what’s in Syria.”