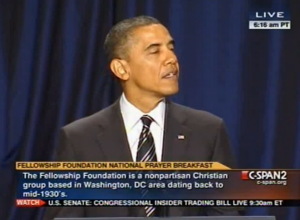 At this morning’s gathering for the annual National Prayer Breakfast, President Barack Obama turned to religious scripture as references for how to best approach economic policies. His faith, he shared, as well as teachings from various other faiths, often serve as his guide.

RELATED: Leave To Tebow What is Tebow’s: Pundits Should Leave The Player Out Of Politics

I must try — imperfectly, but I must try — to make sure those values motivate me as one leader of this great nation. So when I talk about our financial institutions playing by the same rules as folks on Main Street, when I talk about making sure insurance companies aren’t discriminating against those who are already sick, or making sure that unscrupulous lenders aren’t taking advantage of the most vulnerable among us, I do so because I genuinely believe it will make the economy stronger for everybody, but I also do it because I know that far too many neighbors in our country have been hurt and treated unfairly over the last few years, and I believe in God’s command to love thy neighbor as thyself. I know a version of that Golden rule is found in every major religion and every set of beliefs from Hinduism to Islam to Judaism to the writings of Plato. When I talk about shared responsibility, it’s because I genuinely believe that, in a time when many folks are struggling and in a time where we have enormous deficits, it’s hard for me to ask seniors on a fixed income or young people with student loans for middle-class families who can barely pay the bill to shoulder the burden alone.

The President also noted that, when it comes to raising taxes on the nation’s wealthiest citizens, “I actually think that is going to make economic sense, but for me as a Christian it also coincides with Jesus’ teaching that for whom much is given much shall be required. It mirrors the Islamic belief that those who have an obligation to use those blessings to help others or the Jewish doctrine moderation, consideration for others.”

Have a look, courtesy of C-SPAN2: