Attkisson Is Right: Why Are Brian Williams and Hillary Held to Different Standards?

Attkisson Is Right: Why Are Brian Williams and Hillary Held to Different Standards? 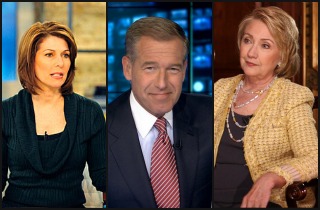 The Brian Williams saga has grown so large it now has its first victim of collateral damage: Hillary Clinton.

You all know the story by now and why it relates to Williams: The then-First Lady and then-teenage daughter Chelsea making a trip to hostile Bosnia. The video and photos of Mrs. Clinton hugging children and smiling as if making her first foray into Euro Disney. Not a care in the world, and certainly not someone ducking and running from sniper fire, as she claimed numerous times on the 2008 campaign trail before finally admitting it was all BS while blaming sleep deprivation. Hillary said in 2008 that she “misspoke,” which isn’t much different from Williams saying he “misremembered”. Our own Andrew Kriell explored this and other examples more in-depth here.

Unlike Williams’ situation, there’s actual video of the event that took place and what didn’t happen when Hillary arrived in Bosnia. There were also award-winning journalists — the kind who are still very relevant today — who were with her at the time, such as Sharyl Attkisson, who was still with CBS News back then (and was one of the first journalists to fly actual combat missions over Kosovo).

Note: Ms. Attkisson gets attacked often by left-leaning media lately for having the audacity to report negative stuff about the Obama Administration. This is the same media who put her on a pedestal for awards won upon exposing fraudulent Haliburton contracts under the Bush Administration during the Iraq War in 2004. These are also the same folks who couldn’t get enough of her Emmy-winning reporting on Bush Administration’s mishandling of TARP funds in 2008.

Does all of that past reporting matter? Of course not. To the usual suspects, Attkisson has magically morphed into a right-wing ideologue with a clear agenda. Could it be that she simply conducts herself like an objective reporter regardless of which party controls the White House? Nah. Doesn’t fit the narrative.

Attkisson’s account of Clinton’s arrival in Bosnia states what the video already shows: There was no duress, no sniper fire. In the end, Hillary simply made the whole thing up, just like Williams fabricated his story about being shot at in a Chinook helicopter for no apparent reason. The why question is the most curious one: Both have/had the credentials, the money, the fame, the resume already to not have to resort to such tall tales, but they went ahead and told them anyway. The theories are endless: Maybe it’s a yearning for attention, for even more respect, for street cred in media or political circles. Or maybe it is some kind of pathological symptom, according to Maureen Dowd of the New York Times. Point being, as Attkisson asked Steve Malzberg of Newsmax TV and Howard Kurtz of Fox the day prior yesterday (paraphrasing): “Why isn’t Hillary Clinton being held to the same standard as Brian Williams?”

“To me, part of the irony is if Brian Williams isn’t able to survive it — that we think it’s important enough when somebody gives this kind of story that he would lose his career — yet we didn’t care enough to have it matter that much with someone who became our secretary of state.”

It would be nice if someone could pose a question in this realm to Clinton, but outside of a Twitter declaration here and there (where she can control the message without inquiry), she’s basically been MIA for the past few months. And that’s a wise political move for now if her disastrous book and Dead Broke media tour last year was any indication. Do you think Rand Paul and Chris Christie are having a tough time with the media right now? Of course they are. Hillary? She would announce her candidacy on Nov. 1, 2016 just to avoid actually having to answer tough questions, including the one I would pose if given the opportunity:

“What are your thoughts on Brian Williams suspending himself from anchoring NBC Nightly News? Do you think someone should remove himself from his job–even temporarily–for lying about an account of being under fire in a war zone when no such thing happened?”

That would be an interesting answer to hear, wouldn’t it?

Maybe one day, when candidate Clinton is back out in the public eye or in front of a microphone, someone with access will actually have the audacity to ask such a question.