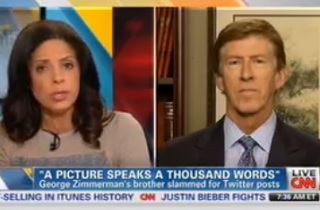 Robert Zimmerman, Jr., brother of Trayvon Martin shooter George Zimmerman, has spent several days trying to spin his way out of trouble over a series of tweets in which he compared the teenager his brother killed with De’Marquise Elkins, the Georgia teenager accused of killing a 13-month-old boy. On CNN’s Starting Point Thursday morning, attorneys for George Zimmerman and the family of Trayvon Martin each offered varying degrees of condemnation for the tweets, which Zimmerman attorney Mark O’Mara called “insensitive, if not much, much worse.”

Over the weekend, Zimmerman, Jr. repeatedly tweeted a photo comparison of Trayvon Martin and De’Marquise Elkins, the 17 year-old who has been detained in the murder of a Georgia infant. Both pictures feature the young men flipping the middle finger at the camera, with the caption “A picture speaks a thousand words…Any questions?”

He also posted several tweets that explicitly made the point that “blacks” are worthy of others’ fear, including one that read “Lib media shld ask if what these2 black teens did 2 a woman&baby is the reason ppl think blacks mightB risky,” and another which said “POTUS spoke of his Mom acting like a “typical” white woman when encountering blacks. The fate of Sherry West might B why.”

For several days thereafter, Zimmerman tried to reframe his racist tweets as media criticism (while basking in the support of fellow twitterers), before finally issuing an apology of sorts Wednesday morning, tweeting “I’m sincerely sorry my tweet offended many – I made a serious error in judgment abt the way it wld convey & understand why it is offensive.”

He appeared on Wednesday night’s Piers Morgan Tonight to further try to explain that his comparison of the (completely dissimilar in every meaningful respect) teenagers and warnings about the riskiness of blacks were really all just media criticisms.

O’Mara began by stepping away from his client’s brother, noting that “Robert does not represent George or the defense,” and adding that the tweets “were insensitive to” and “the opposite of what I hoped the conversation would be” with regard to the way “the system treats young black males.”

However, when confronted with a clip of the Piers Morgan interview in which Robert defended the photo comparison, O’Mara tried to salvage a point, explaining that “I think what he was suggesting was that Trayvon Martin was the aggressor,” but allowed that “I”m concerned with the way it came across at a time when we have to be much more sensitive to the real conversations.”

O’Brien pressed O’Mara, offering the interpretation that actual understanders-of-words took from the tweet. “I thought what he was saying was, like, here’s one black thug, here’s another black thug,” Soledad said, “one of them being Trayvon Martin, and let’s connect the two of them when actually in real life they’re just connected because they’re both teenage boys and they’re both black.”

O’Mara agreed. “The only real connection we know about is they have black skin, and they have middle fingers,” he said, adding “Not the connection to make in a very, very serious conversation.”

Asked if he was worried about the effects of Robert’s tweets, O’Mara said “Certainly, when a family member from my client says something that comes across as insensitive, if not much, much worse, is going to have an effect, and now we have to deal with it.”

O’Brien then interviewed Martin family attorney Ben Crump, who pointed out that “Mark O’mara said yesterday, when speaking about Robert Zimmerman’s Twitter rant, that you can’t judge a person’s heart by reading a tweet,” adding that “he and I agree on that, but when it comes to Trayvon, they attempt to posthumously judge a dead teenager by his tweets and his social media. And that is the problem here. You cannot know what is in a person’s heart by reading a tweet, and it’s irrelevant because George Zimmerman did not know what Trayvon Martin’s Twitter persona was when he got out of the car, profiled, pursued, and shot him in the heart.”

Crump responded that he was concerned with Robert Zimmerman’s tweets ” not to prove or disprove somebody is racist because being a racist isn’t illegal,” but because “his tweets bolster the testimony of potential witness number 9, which, in fact, is his cousin, Soledad, his family member, who within 72 hours after Trayvon was murdered, called the Sanford Police Department and says she knows George Zimmerman, she knows he’s confrontational, she knows he doesn’t like black people. She said his father, mother, sister, doesn’t like black people.” ”

“So if you look at these tweets of Robert Zimmerman which says verbatim, liberal media should ask if what these two people did to a woman and a baby is reason people think blacks might be risky, he didn’t say Trayvon Martin, he said blacks. Meaning that entire black race. That tweet tends to be very consistent with, and support what his cousin said when she first called the Sanford Police Department.”