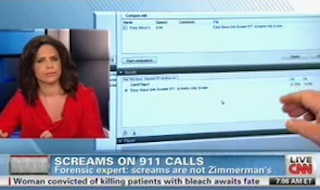 On CNN’s Starting Point, Soledad O’Brien interviewed audio forensics expert Tom Owen, chair emeritus at the American Board of Record Evidence, who used voice identification software to rule out George Zimmerman as the one screaming for help on the 911 calls the night he shot Trayvon Martin.

O’Brien asked Owen how the process worked. “Soledad, it’s done in a manner in which there’s a comparison made between a known and unknown voice,” Owen explained. “In this instance, George Zimmerman is a known voice. He identified himself on the 9-1-1 call. So we know who that is, and then we have the voice of the person who is screaming, and we consider that the unknown, because we really don’t know who that is at this point.”

“How is it possible to compare two voices when the context is so different?” O’Brien asked Owen “One is shrieking and the other one is speaking almost quietly into the phone.”

“Well, the difference between the old comparisons where you had to have verbatim speech are the people saying the same thing,” Owen explained. “And today, the biometric software is able to define three different things, spectographic information, pitch information and what we refer to as gaussian variation, or intra-speaker variability and how much between the words people speak and so-forth. The software at use at NSA, CIA and FBI is able to do that and do that efficiently with no subjectivity whatsoever being thrown into the mix. That’s what this particular software does.”

“So from your software, what was your takeaway?” O’Brien continued.

Owen demonstrated how his audio equipment was able to let him draw a conclusion from the 9-1-1 tapes.

“Well, let me just do this for you quickly. We have the tape of Zimmerman, we have the tape of the screams and then we can start the comparison, and basically it’s going to do this comparison,” Owen pointed out. “If you can see the screen now, and it’s going to give me some false rejection rates, some false acceptance rates, and a likelihood ratio, okay. and this gray dot over here designates the very lower end of the scale, which in essence, is translated as it’s not him.”

Watch Owen show O’Brien how he determined Zimmerman was not the one screaming on the 9-1-1 calls below, via CNN: