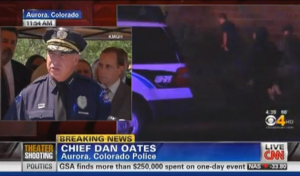 Aurora Police Chief Daniel Oates held a briefing alongside Gov. John Hickenlooper and Aurora Mayor Steve Hogan this afternoon to offer updates on the aftermath of the shooting that took place during a screening of The Dark Knight Rises. Identifying the suspected gunman as James Eagen Holmes, Oates said the count, so far, is that 71 people were shot total. Of those, 12 were killed, 59 injured.

Hickenlooper offered his condolences, adding that, “This is the act, apparently, of a very deranged mind.” He reassured citizens of the safety of the city, state and country. The “reality” that the victims could have been anyone’s children “makes the pain and the grief too intense for words,” he said. Hogan offered similar condolences, thanking all those who helped in the after of the incident — from police officers to medical personnel. “We will always wish that no matter how much we do now that we had done more,” he said — going on to emphasis that the shooting was “tragic” and “horrible,” but an “isolated instance.”

Oates then provided updated information on the case so far. The suspected gunman’s only prior record with the police was for a speeding ticket in 2007. The first 911 calls came in at 12:39am — and officials were at the scene within one to one-and-a-half minutes, immediately transporting victims to area hospitals via police cars.

Around 200 officials were at the scene, where four weapons were found: an assault rifle, a shotgun and a handgun believed to be used at the scene, plus another handgun in Holmes’ car, which was parked right outside the back door of the theater. Without specifying, Oates said “many, many rounds” were fired. Some of those rounds fired in theater nine penetrated into an adjoining theater. (Oates later added that they do not have information about the legality of Holmes’ gun possession.)

Holmes set off two devices, which released irritants/smoke, to distract the crowd. He was dressed in all black, wearing ballistic gear, including a helmet, vest, leggings and gloves, as well as a gas mask. Oates said they are not looking for any other suspects, and are “confident that he acted alone.”

Upon going to Holmes apartment, officials found it booby-trapped with “incendiary devices, some chemical elements, lots of wires.” Citing an “active, difficult scene,” Oates said five buildings in the area have been evacuated. At this point, they are “not speculating” about the motive.

There were four sold-out showings of the film, and Oates said officials interviewed closed to 200 witnesses.

Jim Yacone, head of the Denver division of the FBI, said, at this point, they do not see a nexus to terrorism, but the joint terrorism task-force is on site.

Oates said there are off-duty police officers sometimes working in that theater, but none were that night.

Another update is scheduled for 7 p.m. (local time).

Video of the briefing, via CNN: