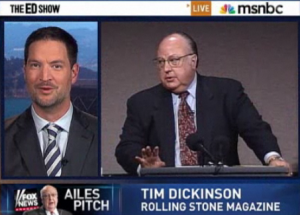 Roger Ailes, the head of the Fox News Channel, is written about very extensively in the latest issue of Rolling Stone. The author of the piece, Tim Dickinson, appeared last night on MSNBC with substitute anchor Thomas Roberts and continued his unflattering description of Ailes, “the Chairman,” as a “deeply paranoid” but extremely powerful man.

“Roger Ailes has always said that he has had a break between his two lives. His life as a politico and his life as a broadcast executive. And I think the main takeaway from my piece is that – that is a fiction. It’s a lie that he’s told to the American people – he’s told it to Congress. But there’s this dramatic through-line where everything he wanted to do as an operative with Richard Nixon in 1968, he’s now doing 24/7 on his political network.”

Dickinson also described Ailes as someone so fearful that he will be targeted by Al Qaeda or gay activists and that traveling with Ailes is “like an episode of 24” given all of his security. This prompted Roberts, an openly gay anchor, to make an admission about the gay people he knows who work at Fox News, saying “I know they’re in his newsroom and they’re on his air.” Dickinson concluded, matter-of-factly saying Fox News is a “24/7 propaganda outlet for the Republican party,” but was a little surprised by his own research:

“What I was really shocked by was the totality of what they were doing. The active collaboration with the Republican party. The talking points that come out of Mitch McConnell’s mouth the same day they come out of Sean Hannity’s mouth.”

However, it seems doubtful that anyone else will be shocked that Ailes maintains conservative connections or that a liberal magazine doesn’t paint a glowing portrait of Fox News’ success.