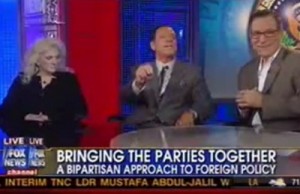 As the snarling strains of “Another One Bites The Dust” echo on the world stage that is now rid of Muammar Gaddafi, and some Republicans rush to diminish any role that President Obama might have had in his demise, the producers of Fox and Friends know just where to turn to sort it all out. Host Brian Kilmeade assembled a panel made up of BreitbartTV editor Larry O’Connor, singer Judy Collins, and former SNL actor Joe Piscopo to debate former Rep. Pete Hoekstra‘s suggestion that the President give back his Nobel Peace Prize.

Kilmeade started out by reading a portion of Hoekstra’s Newsmax column calling on the President to return the prize, then tossed to Breitbart’s Larry O’Connor, who just couldn’t resist a few zingers, saying that Obama should “return the presidency,” and that he deserved to be in thesame league as Yasser Arafat and Al Gore as Peace Prize winners. You could almost hear the ink on Larry’s check to Bruce Vilanch drying.

What was a bit surprising was Kilmeade’s near-gushing praise of the President. “He has to respect what he has done with the drone strikes in Pakistan, taking out al-Awlaki, taking out bin Laden, and participating with the Libya. As of right now he looks good.”

Piscopo agreed, and correctly admonished Republicans to “stop with the petty nagging,” adding, “I’m a life-long Democrat, but I understand you guys sometimes. Why with the pettiness?”

Things got a little sidetracked, though, when Judy Collins suggested that “Music can change the world,” prompting Piscopo to throw on his dead-perfect Frank Sinatra impression, and Larry O’Connor to do a chair-dancing number from Fiddler On The Roof..

Just when things got fun, though, O’Connor stuck in another buzz-killing conservative credit grab, saying,  “Let’s point out this happened because President bush neutralized the weapons program that Libya had. if Gaddafi had those kind of horrible weapons, it would not have gone so smoothly.”

O’Connor is right, of course, that President Bush’s diplomacy with Libya was a success, and, like President Obama’s Libya policy, avoided a costly, deadly preemptive war. More recently, though, this happened despite near-unanimous Republican opposition, so there’s that.