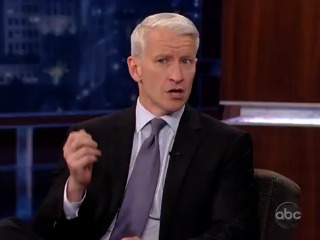 Anderson Cooper, host of roughly 137 television programs, stopped by Jimmy Kimmel‘s show Thursday, where he spoke about the comings and goings, so to speak, of a couple of naked ladies — namely, comedian Kathy Griffin and his mother, Gloria Vanderbilt.

Cooper kicked things off by telling Kimmel about the time Griffin insisted on staying over at his home while he was at work… so that she could text him naked photos of herself splayed all over his furniture during his broadcast. The lesson here is: Never let Kathy Griffin stay at your home. And never, ever sit on Cooper’s living room couch.

He then shared that, while he and Griffin are good friends, she’s actually much closer to his mother, and that the two both love talking about sex. I mean, it’s not like his mom is shy, exactly:

Check it out, via ABC: