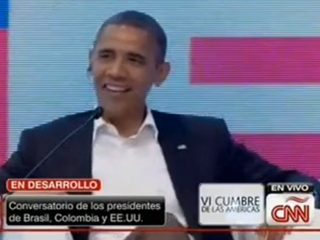 With the Summit of the Americas underway, President Obama was among three presidents of the Americas today to participate in a panel on energy and the economy, among other things, along with Colombia’s President Juan Manuel Santos, and Brazil’s President Dilma Rousseff. Moderating this panel is America’s own Chris Matthews, whose idiosyncrasies, if somewhat confusing to a portion of Americans, was completely baffling for the Latin American presidents. After a particularly contentious question at President Rousseff, President Obama had to step in and explain: “this is what happens,” he tells the audience, when American journalists are unleashed on Latin America.

Matthews asked President Obama how he felt about industrialization in Latin America, except in doing so, essentially managed to accuse Brazil of trying to pull a fast one on America and sink our economy. Brazil isn’t exactly Venezuela or Cuba, but most journalists in Latin America aren’t as forward as Matthews (well, most American journalists aren’t as forward as Matthews) and the style of the question is not one most Latin American journalists would ever use, particularly in the presence of three presidents. Perhaps because of this, President Obama felt he needed to cut the tension with a joke, and he did, lamenting, “this is what happens when commentators from the United States” leave the country, a joke essentially meaning, “this is what I have to deal with.” The joke cut the tension in the room, and left President Obama wide open for a favorable answer to Brazil.

MATTHEWS: I just got a call that there would be four of five minutes left. Would you like to answer, Mr. President? It appears to me that there is a certain enthusiasm… the goal that the President [of Brazil] just brought out, is the notion that Latin America doesn’t want to be a complementary economy in the agricultural and industrial aspects. They give us prime materials and we perfect them. How do you respond to Brazil’s demands to be partners and rivals? They want to use our educational resources and want to know how to compete with us– isn’t this so, Madam President? They want to be equals; they want to speak one-on-one, learn everything we know and then return it. What is your response, President Obama?

PRESIDENT OBAMA: I don’t know if that is what President Roussef said, but this is what happens when commentators from the United States here as moderators [try to pull a fast one on us]. [Laughter] Chris is one of the best, of course, doing this. But look, this is already happening, it is a reality. Brazil has changed, Colombia has changed, and we welcome that change. The notion that we see this as a problem is a mistake because if we have a prosperous middle class in Latin America, those are new clients for us. We do want… Brazil is growing, and that is a vast opportunity.

The video via CNN en Español (h/t to my dad) below: