Axelrod And Scarborough Go Head To Head On Obama Budget Proposal: ‘The Same Budget That Got Zero Votes’
Video

Axelrod And Scarborough Go Head To Head On Obama Budget Proposal: ‘The Same Budget That Got Zero Votes’ 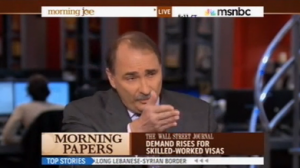 Shown a Washington Post / ABC News poll comparing President Barack Obama and GOP presidential hopeful Mitt Romney, Axelrod said people don’t think Romney really “gets” what’s going on in their lives where the economy is concerned. But, as host Joe Scarborough pointed out that — all talk of car elevators and edited clips about firing people notwithstanding — the poll shows Romney beating the President by four percentage points when it comes to the matter of who voters trust with “handling the economy.”

We’ve come through the worst economic crisis since the Great Depression. We’re still feeling the effects of it. And I have always said, there’s two crises that have been side by side: one is the short-term of people who are out of work, and then there’s the long-term of whether who’s going to pay, which has been lingering for more than a decade, wages flat and declining. So, you know, of course there are questions about the economy. The question is whether the answer is to go back to the same policies that got us into the mess in the first place, and when you listen to Mitt Romney, that’s what he’s prescribing — tax cuts for the very wealthy, cut Wall Street loose to write it’s own rules and, somehow, we’ll prosper and everyone will benefit from that. We have tested that proposition, it was an abject disaster.

Axelrod also had high hopes for the Buffett Rule and the President’s budget proposal.

“…The same budget that got zero votes,” Scarborough pointed out. “Why can’t the President get even a Democrat?”

“You understand the game,” Axelrod told him. “That is meaningless political theater.”

Scarborough later told Axelrod that he wouldn’t have acted as an ally to someone who “demagogues Medicare” or who shows “no courage when it comes to entitlements.”