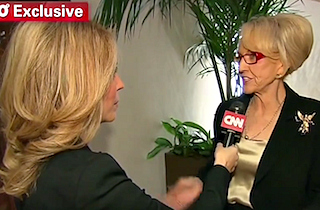 CNN’s Dana Bash pressed Arizona Governor Jan Brewer Monday night as to her plans for SB 1062, a bill that would allow businesses to refuse service to members of the LGBT community, and one that many, including the state’s two Republicans senators and some of the lawmakers who voted for the bill, have urged the governor to veto.

“We have been following it,” Brewer said. “I will make my decision in the near future. I have until Friday or Saturday morning to determine that.”

Bash asked if the pressure from Arizona’s business community, concerned about the economic impact of the bill, would have any effect on her decision.

“I have a history of deliberating and having open dialogue on bills that are controversial, to listen to both sides of those issues,” Brewer said. “I welcome the input and information that they can provide to me. And certainly I am pro-business. That is what’s turning our economy around. So I appreciate their input, as I appreciate the other side.”

Bash tried another tack, asking if Brewer had any gut feeling, not as a governor but “as a person, as a woman,” what she would do about the bill.

“You know, I am a woman,” Brewer said. “I don’t rely a whole lot on my gut. I have to look at what it says and what the law says and take that information and do the right thing. I can assure you as always I will do the right thing for the state of Arizona.”