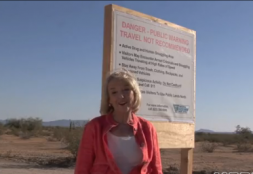 Arizona Governor Jan Brewer, who is up for election this November, is throwing her hat in YouTube campaign commercial ring. Brewer, perhaps taking a page from John McCain, filmed her new spot 80 miles from the AZ border in front of new signs erected by the Federal government this month warning visitors that traveling in the desert is not safe because it is a “active drug and human smuggling area” and that visitors may encounter armed vehicles. Says Brewer:

Two weeks ago I met with President Obama, he promised that we would get word from his administration on what he would do to secure the border, well, we finally got the message…these signs…These signs warning people of danger and telling them to stay away…I’m 80 miles away from the border and only 30 miles away from Arizona’s capital. This is an outrage! Washington says our border is as safe as it’s ever been. Does this look safe to you?

Safe to say, the answer for most people is no. Some background on the signs: The federal government has erected them near the desert recreation area south of Interstate 8 between Casa Grande and Gila Bend. From the Phoenix News:

The signs were suggested by rangers who work the area after a rash of violence and shootings related to drug and human smugglers, according to the Bureau of Land Management.

Federal Law Enforcement Rangers began reporting increased danger in the area a year ago. Since January there have been at least 12 incidents involving gun violence within the land managed by BLM.

It’s a smart development for Brewer to latch on to. The signs — disturbing no matter what your thoughts on immigration reform are — are just the sort of simple visual that could seriously undermine Obama’s push for immigration reform and at the same time function as the basis for her reelection campaign. Watch below. Update: John McCain just brought up the signs on Meet the Press just now — I would not be surprised if they go viral this week.