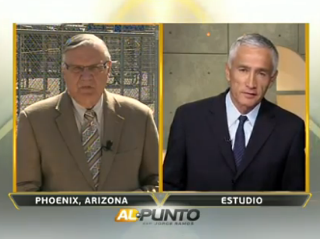 Maricopa County, Arizona Sheriff Joe Arpaio made his name as a strong– perhaps too strong— advocate of legal immigration, before picking up the Donald Trump mission to find President Obama’s real (?) birth certificate. So he couldn’t have been expecting a softball interview yesterday morning on Univisión’s Al Punto, where host Jorge Ramos asked him to explain how he had become the “face of racism,” and responded to Arpaio’s claim that “Latinos love me” with a deadpan, repeated, “no, they don’t.”

“Do you think that President Obama is not an American? why are you doing this?” Ramos asked Sheriff Arpaio, who explained he was still investigating the President’s birth certificate. He made clear that “no cost to the taxpayer” came from this investigation, but “I’ve had 250 tea party come to my office, wanted me to investigate,” and ex-cops volunteered, so he essentially saw no fault in it.

Ramos then switched gears to the topic of immigration. “For many Latinos, you are the face of racism and discrimination,” Ramos told Arpaio, but was cut off before he could actually ask a question. “I’m a pretty nice guy, having lived in Mexico City, South America, Texas, Arizona… they love me!” “No, they don’t,” Ramos replied, twice, adding, “I know you’re making fun of this but, they don’t.” Arpaio angrily countered, “How do you know they don’t like me?” and Ramos replied that he had done interviews with several illegal immigrants who told him so, as well as conducted several polls. Ramos also says that Arpaio is, to them, “the voice of America,” which seems like a significantly broader brush with which to paint, but Arpaio contests only the original charge: “I’m going to continue to enforce the laws.”

The exchange via Univisión below: