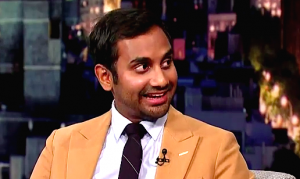 “I have some beef with Rupert Murdoch,” comedian Aziz Ansari told David Letterman during an interview set to air on the Late Show tonight. “Which is a sentence I didn’t think I would ever really say.”

As Letterman put it, Murdoch is “one of the most powerful media owners, figures in the world,” while Ansari described himself as “a little brown man on a show that’s about to go away.”

The Parks and Recreation star was referring to a series of tweets he posted earlier this month in response to Murdoch’s “racist” suggestion that all Muslims should be held responsible for extremist attacks:

.@rupertmurdoch Rups can we get a step by step guide? How can my 60 year old parents in NC help destroy terrorist groups? Plz advise.

He then started the hashtag #RupertsFault to blame the 21st Century Fox chairman for every bad thing that white people do:

All Christian militia people and anyone they've hurt. #RupertsFault

On Thursday, he tweeted at Murdoch to make sure he tunes in tonight:

Sorry, I'm going to be on Letterman TOMORROW. @rupertmurdoch still plz tune in.