Bachmann: America’s Founders ‘Worked Tirelessly Until Slavery Was No More’ 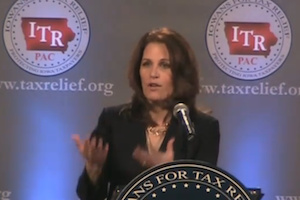 The bad news is that Michele Bachmann seems to have a slightly skewed vision of how America was founded. The good news? Her version is much nicer. Sure, it’s not 100% true that America’s founders “had different cultures, different backgrounds, different traditions” and that they all fought until slavery was abolished. But, hey, it sure sounds nice so why don’t we go with it?

The comments were made at Bachmann’s speech at an Iowan’s for Tax Relief Event which, unsurprisingly because of the name but importantly because of the statement it makes about her 2012 plans, took place in Iowa. There she began to talk about the great legacies the Founders imparted for us but got a few details off, especially when she began talking about slavery. Talking Points Memo has the details:

“Bachmann (R-MN) also noted how slavery was a ‘scourge’ on American history, but added that ‘we also know that the very founders that wrote those documents worked tirelessly until slavery was no more in the United States.’

‘And,’ she continued, ‘I think it is high time that we recognize the contribution of our forbearers who worked tirelessly — men like John Quincy Adams, who would not rest until slavery was extinguished in the country.’

It’s true — Adams became a vocal opponent of slavery, especially during his time in the House of Representatives. But Adams was not one of the founders, nor did he live to see the Emancipation Proclamation signed in 1863 (he died in 1848).”

Her speech was well delivered (no zombie-ism here) and inspirational but these are some pretty bad mistakes to make. Especially when the Tea Party is so adamant that their political enemies have forgotten the lessons of the Founding Fathers. Let’s just say Bill Maher could have a lot of fun with this clip.

Check out the clip from EYEowa below: