Bachmann Denies Saying Shutdown ‘Exactly What We Wanted’: WaPo and Obama ‘Misquoted Me’ 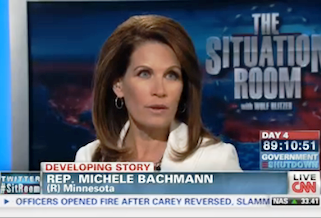 Friday afternoon, Rep. Michele Bachmann (R-MN) sat down with CNN’s Wolf Blitzer to offer her response to comments made by President Obama earlier in the day about his willingness to negotiate with Republicans. The congresswoman also disputed comments she made about the government shutdown being “exactly” what the GOP “wanted.”

Bachmann rejected Obama’s proposal to end the government shutdown before negotiations over health care and other issues begin. “The president is saying fully fund the government, don’t negotiate on any of the programs,” she said, “on how much we’re spending, and then keep giving him all the money that he wants in order to keep spending, so then what is there left to talk about?” If the “president is saying ‘I’ll negotiate after you give me everything I want,'” Bachmann asked, “then what is there left to negotiate on?”

Blitzer pointed out that all the president is really asking for is that Congress end the government shutdown and raise the debt ceiling. “Isn’t that your job?” he asked. After Bachmann clarified what her job is, Blitzer moved on to show a clip of Obama “ridiculing” a statement she had made earlier in the week that the shutdown is “exactly what we wanted.”

“A lot of times the media gets it wrong,” Bachmann responded. “Now the president of the United States is getting wrong quotes.” She backtracked on the quote from The Washington Post, saying, “What we wanted is the ability to be able to put on the floor what we agree on, because we were having problems getting to yes, getting to agreement on Obamacare.” She indicated that her comments referred to attempts to fund parts of the government that everyone could agree on and not the shutdown itself.

“No, absolutely not. The quote was wrong and the president had misquoted me as well, probably taking it inadvertently from the The Washington Post that got it wrong.”

As it appeared in The Washington Post on Saturday, September 28th, before the shutdown went into effect, Bachmann’s quote did appear to refer to the inevitability of the government shutdown. The article, by Ed O’Keefe and Rosalind S. Helderman began:

While much of official Washington on Saturday somberly faced the likelihood of a government shutdown, the most conservative members of the House sported a different expression.

“We’re very excited,” said Rep. Michele Bachmann (R-Minn.). “It’s exactly what we wanted, and we got it.”

UPDATE 8:10pm ET: Bachmann’s communications director Dan Kotman sent Mediaite audio of the congresswoman’s original comments, which her team claims were taken out of context by The Washington Post and subsequently President Obama. The full quote, which can be heard in the player below, reads: