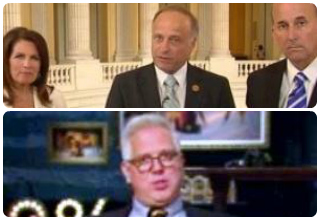 With immigration reform still going through Congress, a number of conservative Republicans are not happy with how their party has jumped on the bandwagon to fight for a bill that concedes the argument to the Democrats. Michele Bachmann, Louie Gohmert, and Steve King made a joint appearance Thursday on Glenn Beck‘s show to lobby him and his audience directly to stand up against a bill that they say is only getting bipartisan support because of how progressivism is spreading throughout the Republican party like a disease.

Bachmann insisted that they will be able to “kill” the bill, while King explained how people are getting selective information on immigration reform that only touts the positives of passing it. He said they will be holding a press conference next week, admitting that “we can’t get the right debate inside of Congress.” Bachmann described the event as a “Lincoln-Douglas debate” to tackle the issue, pointing out that the American people “pushed back hard” the last time Congress tried to take up this issue.

Bachmann added that a lot of people (singling out Beck’s viewers in particular) don’t know what’s going on, and admitted the conservative wing of the GOP is “losing badly.” She made an appeal to Beck’s viewers to flood their congressperson’s office with phone calls telling them that they want any immigration bill to make border security priority number one.

Gohmert pushed back against the idea that they are “hurting our party politically,” citing polls showing Americans having a growing distrust in government. Beck pledged that he is behind their efforts, touting that he has a “very active audience” who will send a message to Congress before the bill is voted on.

Watch the video below, courtesy of BlazeTV: