Bachmann: I Was An IRS ‘Insurgent’ Because ‘Understanding The Enemy’ Is ‘Best Way To Defeat Them’
VIDEO

Bachmann: I Was An IRS ‘Insurgent’ Because ‘Understanding The Enemy’ Is ‘Best Way To Defeat Them’ 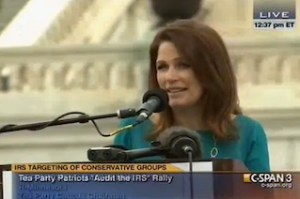 Rep. Michele Bachmann (R-MN) delivered a short speech the the Tea Party Patriots’ “Audit the IRS” rally Wednesday afternoon and used the opportunity to defend her former career with that very same government institution. Claiming she was an “insurgent” at the IRS, Bachmann said she only took the job because she believes that “if you understand the enemy from the inside out, that’s the best way to defeat them.”

“Well, it’s been a hundred years now that we’ve had the current United States tax code,” Bachmann said to the adoring crowd. “Don’t you think a century of oppression is enough?” From there she went on to tell the story of her “former life” when she was “an insurgent” at the IRS.

“I was an insurgent because because I absolutely wanted to defeat the tax code and bring more liberty about in the United States,” she said. “And so after I went to law school, I got a post-doctorate degree in tax law and after that I got a job with the IRS as a tax lawyer. Because I believe if you understand the enemy from the inside out, that’s the best way to defeat them.”

Bachmann described her colleagues in the House of Representatives as being “more frightened of real people than anything else.” So, she said, “I think that there are shivers right now going up of a lot of politicians in that building,” she said, referring to the U.S. Capitol behind her. “You’re here and you’re clear with your message,” she concluded. “And your message is, it’s time to abolish the IRS!”

During her campaign for the Republican presidential nomination in 2011, Bachmann’s four-year stint as a tax lawyer for the IRS drew criticism from her competitors. She used similar rhetoric then to dismiss any suggestions of hypocrisy, citing “the first rule of war”: “know your enemy.”