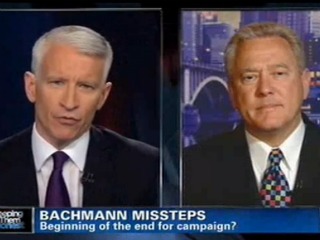 On Wednesday night, Anderson Cooper took some time to address how Michele Bachmann‘s recent comment about the danger of the HPV vaccine — relaying a story about a Tampa woman who supposedly shared that her daughter had developed mental retardation following the vaccination — fits in with other misleading and incorrect comments she had made in the recent past.

Now it’s certainly not a new phenomenon for politicians to stretch the truth and manipulate facts. But Bachmann is spreading an all-out falsehood here — a dangerous falsehood at that. It’s not the first time she’s done this by any stretch of the imagination.

He then played various clips of Bachmann making inaccurate statements — such as that President Barack Obama had traveled on a taxpayer-funded, $200 million-a-day trip India with 2,000 people and that he’d released all the oil from strategic reserves — and misleading statements, like the “observation” that swine flu broke out in the 1970s under a Democratic president as well.

So. Do voters care about the truth? Does the fact that Bachmann has slipped in the polls recently have anything to do with these type of statements? To answer these questions, Cooper brought on Bachmann’s former Chief of Staff, Ron Carey, who offered a fairly fascinating theory for why Bachmann has a tendency to share and perpetuate erroneous statements:

Well, Michele is very impulsive from a personality standpoint and, to her credit, she reads an awful lot of information, but sometimes I’m afraid that she reads maybe 80 or 90 percent and leaves out or forgets the ten or 20 percent that can change the outcome, so her impulsive nature coupled with the fact that she sometimes doesn’t digest information as carefully as she should leads to these kinds of impulsive statements that sometimes are just off the mark enough that it makes her into more of a provocative, controversial figure.

One of the challenges I’ve found with working with Michele, and it’s consistent with other people who have worked with her, is the fact that she doesn’t use her staff well. She’s pretty much independent and does her own research. She’ll be out there on the stump, preparing her remarks and speaking off the cuff with no staff intervention or involvement whatsoever, so it’s really difficult to prep her and help her kind of back-check before she goes out speaking because she will be out there speaking and you’ll say, “Where did this come from?” and it’s something that she maybe heard on TV.

CNN political analyst David Gergen then shared his theory on what her statements have to do with her views on science.