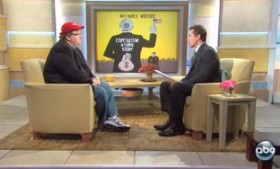 Michael Moore took to Twitter early this morning to report his first network cancellation in his tour to promote his controversial new film, Capitalism: A Love Story:

Michael Moore on Twitter: “Backlash Begins: CBS has cancelled (sic) me on its Mon. morning show. After I criticized ABC/Disney on GMA, they didn’t want me to do same to CBS.”

CBS, however, says he was never booked on the show.

Background: Moore was on ABC’s Good Morning America last week and called out ABC’s practice of hiring “permalancers” — permanent freelancers who are essentially full-time workers but are on contract rather than salary, which means they don’t get any of the benefits normally extended to employees. Here’s what Moore said, on the air:

“People backstage here — they don’t get to be real employees here because they don’t get the benefits, so they’re freelancers…and I said ‘Guy, I was here two years ago, you were a freelancer, what are you doing here?’ — right backstage here at ABC — he said, ‘We call ourselves permalancers now.’ They don’t get to share in just the basic benefits that an employee used to have who worked here. What’s wrong with that? What is wrong with just giving people basic things for their hard work?”

ABC’s Chris Cuomo handled it smoothly, responding “You demonstrate the question very well in the new movie and you do it in lots of ways. People will get where you’re coming from.” No biggie, right?

Maybe. Here’s the statement from a CBS spokesperson: “Michael Moore was never booked on The Early Show.” Full stop. So why did Moore tweet that then?

We reached out to a publicist from Overture Films, the distributor for Capitalism and here’s what we were told: Moore was not “confirmed” on the Early Show per se, but the Overture publicists had been in ongoing talks with the CBS Early Show bookers to have him on, as schedules evolved and dates moved around. On Wedensday, Moore did GMA; on Friday, the Overture pubicists contacted the CBS bookers to confirm for Monday, a date which had been previously settled upon. It was then that CBS said they no longer wanted to have Moore on.

“I can accurately say that the bookers who book the show have definitely been in discussion with us to have him on the show,” said the Overture rep. “When we attempted to confirm the booking they said they didn’t want to follow GMA.”

The Overture rep declined to give me the name of the bookers involved, but said that there had never been any mention about not wanting to follow GMA, nor had there been any discussion of morning show exclusivity.

So: Was Moore “canceled” from a booking that was never “confirmed?” And was the reason “not wanting to follow GMA” or not wanting to get grilled on-air about CBS permalancers? “I think CBS Early show is great, I wish them well but I think theyr’e missing the bigger picture here, which is Michael’s a great guest,” said the Overture rep. “Whether you agree with Michael Moore’s politics or not, he’s great TV.” It does seem strange to ix-nay a newsmaker while he’s in the midst of making news, and after a successful opening weekend; then again, Moore had his week of making the rounds, and CBS could legitimately think he’s played out. Whom you believe on this will probably come down to if you like Michael Moore or not.

But for the record, my take on the answer to the question in the headline is: Yes.

This post has been edited and changed numerous times today, as various pieces of the story trickled in. We’re sticking with this one.