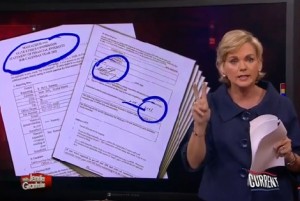 In a story that now has more smoking guns than the Cheech and Chong Armory™, Current TV’s The War Room with Jennifer Granholm reports that they’ve uncovered even more documents that contradict former Massachusetts Governor Mitt Romney‘s claim that he had nothing whatsoever to do with Bain Capital after February of 1999. Even if stubborn fact-checkers won’t do their jobs, the rest of the media ought to do theirs, and report what these documents indisputably say.

Building on reporting by The Washington Post, whose expose´ on Bain Capital’s outsourcing became the subject of Obama campaign attacks on Mitt Romney, and Mother Jones‘ David Corn, who uncovered SEC documents which contradict Mitt Romney’s claim that he’s not responsible for Bain’s outsourcing, and The Boston Globe, who found more such documents, former Michigan Gov. Jennifer Granholm revealed new evidence that Mitt Romney actually had a say in what the company he owned did.

“We have uncovered documents that reveal he was actively involved in Bain Capital businesses, even though he claimed he retired from the private equity company in 1999,” Gov. Granholm told viewers Thursday night. “Current TV has learned that Mitt Romney was the 100% stakeholder in 11 Bain Capital entities later than 1999. Romney signed, in 2003, a Massachusetts State Ethics Commission document stating he held several ‘executive’ positions at Bain Capital and its affiliates.”

What makes this filing different than the others uncovered is that, according to Gov. Granholm, “This Massachusetts Ethics Commission filing distinguishes between the Bain companies in which he played an active role, and others where he had ‘no active role.’”

The Romney campaign’s entire defense against the outsourcing claim rests on their claim, dutifully repeated and defended with lawyerly vigor by the website FactCheck.org, that “Since February 11, 1999, Mr. Romney has not had any active role with any Bain Capital entity and has not been involved in the operations of any Bain Capital entity in any way.”

How big the pile of contradictory documents has to get before FactCheck.org resumes doing its job is anybody’s guess, but the mainstream media needs, at this point, to emerge from the weeds and hold Mitt Romney accountable for what these documents prove beyond any doubt. Whether he was involved in day-to-day operations, or in specific deals, these documents prove that Mitt Romney was responsible for everything Bain Capital did from 1999 until at least 2002.

Mitt Romney was in Salt Lake City working on the Olympics, not the dark side of the moon. If any reasonable person chooses to believe that he could not have directed his Bain employees to abstain from investing in outsourcing and offshoring companies, then let him answer that question. He’s running for President of the United States, a position which will require him to take responsibility for the things he signs, even if people get mad at him later.

The wildly contradictory Bain-related documents raise a Hydra-headed raft of fascinating questions, so it’s easy to get lost in the details, but it’s time for the mainstream media to take a step back and ask Mitt Romney these fundamental questions.

Update: You can view the documents in question here.

Here’s the clip, from The War Room: