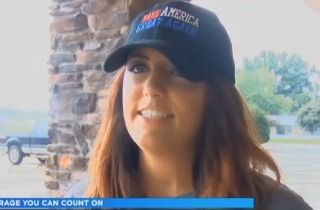 A Louisiana teenager’s Facebook page is getting quite a bit of attention after she spoke out about her local bakery’s refusal to make her a cake decorated with the name of her presidential candidate of choice.

Donald Trump supporter McKenzie Gill went to Albertson’s grocery store earlier this week, hoping to get a cake with “Trump 2016” written on it in celebration of her 18th birthday. An employee refused her request, which led Gill to say “Did that really just happen?” when she wrote about her experience online.

While Gill said that the employee told her they could put an American flag on the cake, she wasn’t satisfied at all with the store’s dampening of her Trump-themed party. Gill and her parents filed a complaint with the company against the store, and took their business to another locale.

“I was just venting on Facebook when I made the status that I made, I didn’t think I was going to get as much attention as it did,” Gill said. “Trump is just someone I really look up to.”

Albertson’s spokeswoman Connie Yeates addressed the commotion by stating that the employee thought that writing “Trump 2016” on the cake would violate the store’s policy on the use of copyrights.

“We apologize to our customer in Bossier City for the situation regarding the cake that was requested. Our Bakery staff member misunderstood the training provided regarding copyrighted phrases, and incorrectly informed the customer we could not fulfill her request. We would be happy to provide the cake as the customer requested.”

Watch a local report above, via KSLA.