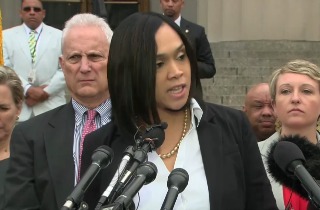 Maryland State Attorney for the city of Baltimore Marilyn Mosby announced on Friday morning that 25-year-old Freddie Gray‘s death in police custody was ruled a homicide by the medical examiner, and that there is probable cause to file charges against six officers involved.

Mosby also said there was no probable cause for Gray’s “illegal” arrest, and that Gray asked for medical help multiple times but was ignored “in a grossly negligent manner.” She also called on protesters to maintain the peace in Baltimore and nationwide: “I heard your call for ‘no justice, no peace’ and I need you to deliver peace.”

This announcement comes as demonstrations in Baltimore became violent earlier in the week, and have since spread to other cities including New York and Philadelphia.

The Washington Post reported this week that another prisoner in the police van said Gray was banging against the walls of the van in an effort to injure himself. That claim, however, was later disputed by another prisoner. Mosby’s announcement seems to contradict those reports, as well as a WJLA one claiming the medical examiner had determined Gray’s injuries were sustained when he “slammed into the back of the police transport van.”

Mosby described the details of Gray’s arrest, including how he was not put in a seatbelt as is required. She also said the knife Gray was carrying was not a switchblade, and is legal under Maryland law. She also echoed Baltimore Police Cap. Eric Kowalczyk, who announced on Wednesday that the findings of the investigation will not be released to the public. Mosby said the evidence “cannot ethically be released to the public.”

According to Mosby, the charges were filed this morning. She was not able to say whether the officers were in custody. Onlookers cheered and applauded after she read her statement and answered questions from the media.

According to the Associated Press, the Baltimore police union believes the six officers involved were not responsible for Gray’s death and were “diligent.”