Baltimore Police Commissioner to CNN: ‘We Are Part of the Problem’ 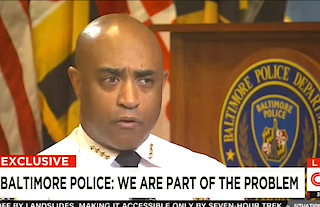 “We are part of the problem,” Baltimore Police Commissioner Anthony Batts told CNN’s Evan Perez of his officers and department on Monday in his first interview since the death of Freddie Gray. “The community needs to hear that,” he added. “The community needs to hear from us that we haven’t been part of the solution, and now we have to evolve. Now we have to change.”

Batts admitted that he was “probably surprised” to hear that Maryland State Attorney Marilyn Mosby had charged six of his officers for the death of Gray, saying he found out just 10 minutes before the rest of the world. “And then my mind started going to, what is going to be the response in community?” he said. “My officers, how do I keep them engaged, how do I keep them focused on getting their job done as a whole?”

He also said it was a bit unusual for Mosby’s investigation to be so disconnected from his, but understood that she wanted to limit leaks and prevent any impressions that they were working too closely together. “She didn’t want to be seen connected to the police organization, so the communication was limited as compared to what I’m used to,” Batts said.

Today in court, one of the six officers who was charged, Edward Nero, defended the arrest of Gray, who he says was carrying an illegal knife. If the weapon, which Nero’s lawyer described as a “spring assisted, one hand operated knife” in deemed illegal, that would mean that Gray’s arrest was legally justified and the officer could have charges of second-degree assault, misconduct in office and false imprisonment dismissed.