Bank Tries To Evict 103 Year-Old From Her House, But Movers And Sherriffs Intervene 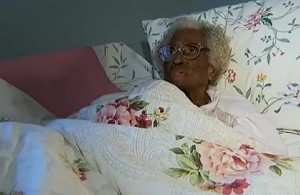 Any time a story involves a 103 year-old woman and her 83 year-old daughter, it’s automatically a heart-warmer. Throw in two major banks as the villains, and the tale borders on Capra-esque.

Vinia Hall had been living in her house on Penelope Road in North Atlanta for 53 years with her daughter, 83 year-old Kathelyn Cornelius. Several years ago, the ownership of the house was transferred to Hall’s grandson, Ali Muhammad, who failed to make payments and had the house foreclosed on the women. The case had been tied up in courts for the last two years, but JPMorgan Chase, the bank handling the mortgage (which was originally done through Deutsche Bank), gave them a deadline of Nov. 29.

When the Fulton County Sheriff’s Department showed up on Tuesday to kick Hall out, they took at look at the frail woman and decided to just leave instead. “It was a cold, nasty day,” Tracy Flanagan, of the Fulton County Sheriff’s Office, told ABC News. “When the deputies got there, all they had were names on a paper. You have to use sensitivity and take a second look at it.”

The movers then arrived and saw the deputies pulling away, so they followed suit. And now, it appears Chase Bank had their hearts warmed, as well. A Chase spokesman told The Atlanta Journal-Constitution that, “We will work out a resolution to keep them in the home.”

As for Hall? She only asks that this be the end of the hassles for now. “Please don’t come in and disturb me no more,” she pleaded to the bank through Atlanta’s WSB TV. “When I’m gone you all can come back and do whatever they want to.”

Enjoy the report on the non-eviction below, courtesy of WSB TV: