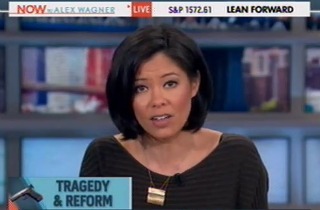 The White House has been on the receiving end of sharp criticism after President Barack Obama allowed the grieving mother of one of young victims of the massacre at Sandy Hook to deliver the weekly presidential address and advocate for stricter gun laws. Critics accused Obama of cynically co-opting a grieving mother to advance a political agenda. MSNBC host Alex Wagner and her panel guests defended Obama’s move on Monday, saying that showcasing the visceral grief of a mother of a slain child is no different from showing pictures of “oil-covered birds” to advocate for stricter environmental protections.

Of course, this last contrivance signals the end of the gun control debate. The movement’s advocates, spinning wildly, betray the fact that the push for new gun control has entered its terminal descent phase. The movement’s death throes are pitiful to watch, though, as its champions avoid every possible opportunity to engage in an bit of introspection lest they wind up asking the the terrible question, ‘How did we lose the public debate about new gun laws in the wake the unprecedented atrocity in Newtown?”

Over the weekend, Francine Wheeler, the mother of 6-year-old Ben Wheeler who was killed in the massacre at Newtown, Connecticut, delivered Obama’s weekly address through tears of grief. She pleaded with lawmakers to consider new laws that may avert future massacres.

“Let’s talk about this idea of politicizing a tragedy,” Wagner said to author Wes Moore. “Because, I see this and I think, this is a reminder of what we’re talking about in the same way that showing pictures of oil-covered birds isn’t exploiting wildlife to talk about energy reform. Nor is talking about the death count in Afghanistan exploiting a tragedy to talk about what we’re doing overseas and our foreign policy.”

Moore agreed. He said that Obama was not politicizing the issue by allowing Wheeler to deliver the weekly White House address, he was “humanizing it.”

Moore said that the fact that the months that have elapsed since the tragedy at Sandy Hook has reduced the impetus to enact stricter gun laws. That is why it is critical, Moore observed, to continue to remind Americans about the human element in gun violence. “The more far removed we are from Sandy Hook, the more challenging it is for people to remember that,” Moore added.

Bloomberg View columnist Joshua Green also agreed, noting that it is “perfectly appropriate” for pro-gun control advocates to inject emotionalism into the debate. He said that National Rifle Association CEO Wayne LaPierre’s form of sentimentality, “going berserk in front of a lectern talking about the apocalypse,” would not be as compelling as Wheeler’s address.

Of course, showing the tearful images of grief-stricken parents advocating a political position that Wagner agrees with is not only acceptable but laudable. But don’t show the images of fully-formed fetal corpses in order to advocate against late-term abortion. That would be ghoulish.

With the Senate preparing to pass a minor reform package in comparison to the wildly optimistic proposals gun control advocates pressed for at the height of their latest push for new gun laws, the issue is set to fade into the background. This last appeal to emotional blackmail is the final demonstration of how the gun control movement has lost the debate, is bankrupt of ideas, and now merely seeks to dissuade their opponents from speaking out too strongly by appealing to their sense of empathy.

If moderate Republicans and Democrats in the House can unite to pass the Senate’s compromise bill amending background check laws, gun control advocates will declare victory. They have, in spite of their willful self-delusion, suffered a stunning series of defeats and setbacks as they sought to maximize the political benefit of the Newtown tragedy. This final appeal to cheap emotionalism underscores how every logical argument the gun control movement has been systematically dismantled. Worse, they were dismantled by those groups and individuals they had dismissed as unsophisticated brutes.

No, these questions cannot be asked. The conclusions they would reach, should gun control proponents devote time contemplating them, would be too painful to internalize.