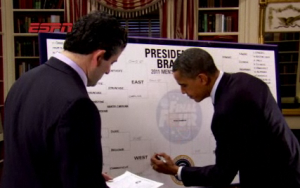 In what has become an annual tradition, critics of President Obama are slamming him for taking the time to select picks for the NCAA’s “March Madness” College Basketball Tournament, when he should be focusing on…(fill in current event here). I say “has become an annual tradition” because, prior to the Obama presidency, I don’t remember another President being criticized for such a brief sports-related diversion. Is it the president in question, the sport, or both?

The message isn’t very subtle, now, is it? President Obama can’t be bothered with Libya, or Japan, or the budget, but he loves him some basketball. Not that “all-American” pastime that George W. Bush loved so much, baseball, as Mike Huckabee pointed out, but that Mau-Mau-loving, Boy Scout-hating, sport of…well, it actually is an American sport. Just not the kind of “American” that matters to people like Mike Huckabee.

The fact is, though, that Barack Obama really does love basketball, so what’s the problem? It shouldn’t be. March Madness is a huge event for millions of Americans, all of whom expend a similar amount of time and attention filling out their brackets. The difference, though, is that “good” Americans can manage to follow the tournament, and do their jobs. But with Barack Obama, that basketball fever just takes aholt of him, and just crowds all the Libya, Japan, and budget right up outta him.

What makes this criticism truly mystifying is that, of all the things he’s supposed to be doing instead of taking five minutes to make basketball picks, no one can really say what he ought to be doing differently. There’s a lot of support for a no-fly zone in Libya, but very little support for another war in the Middle East. Unfortunately, a no-fly zone isn’t as simple as installing an aerial crossing guard.

In Japan, the US has offered more assistance than the Japanese want, and has moved Americans out of harm’s way at a distance four times greater than Japanese authorities have recommended.

As for the budget, I’ve held the evidence of the President’s engagement in my hands, all ten pounds of it.