Barack Obama: I’ve Slipped On My Commitment To Change Tone Of The Debate 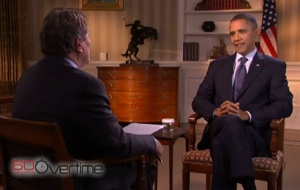 President Barack Obama gave his first post-midterm interview to 60 Minutes (which aired last night) and claimed that the political cost of reforming health care was more than he had expected. He also owned up to a series of errors since taking the office highest office: misjudging the speed of the economic recovery and in his inability to “change the tone” of the debate in the nation’s capital, noting that leadership “isn’t just legislation.”

“We were so busy and so focused on getting a bunch of stuff done that we stopped paying attention to the fact that, yeah, leadership isn’t just legislation, that it’s a matter of persuading people and giving them confidence and bringing them together, and setting a tone,” Obama said in an interview conducted Thursday for airing Sunday on CBS’s “60 Minutes.” “We haven’t always been successful at that, and I take personal responsibility for that. And it’s something that I have to examine carefully as I go forward.”

While Obama stopped short of expressing public regrets about specific policy decisions, he continued the tone of contrition that he set in a televised news conference the day after Tuesday’s midterm elections saw Republicans recapture the House and narrow the Democratic majority in the Senate.

“Part of my promise to the American people when I was elected was to maintain the kind of tone that says we can disagree without being disagreeable. And I think over the course of two years, there have been times where I’ve slipped on that commitment,” the president said. He did not appear to offer specifics.

Watch the entire and unedited 70 minutes of the interview with 60 Minutes below: