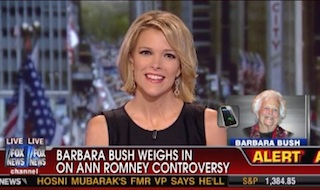 Not to use too crude a visual image, but there must have been an amazing test of our nation’s pants fabrics yesterday thanks to the collective tent-pitching going on at RNC headquarters when they came across Democratic strategist Hilary Rosen’s comments about Ann Romney’s work experience. After weeks of losing tons of female voters who apparently were fans of both women’s health and not being called “sluts,” the RNC has finally found a finger to plug the dike with and they have seized on it. In the hours between 7am and 2pm today, Fox News has done 12 whole segments on their new superstar Rosen.* The last segment of that dozen happened right at the top of the 2 o’clock hour as Megyn Kelly fielded a phone call from “everybody’s grandmother” Barbara Bush who offered her opinion on the comment.

“You know, some people choose to stay at home and raise their children and some people really aren’t built that way. They can do both. But five boys is a handful. Trust me. Raising George Walker was not easy.”

Kelly then got into the idea that Rosen’s comments were actually about the Romneys’ wealth asking if Bush agreed that the extremely wealthy can’t relate to working** people.

“I don’t think that’s right. I go to the grocery store and I know Ann does too. You see people who cannot afford to buy the luxuries they want. Or whatever store. But, having said that, you shouldn’t be critical of other people. You should think of what you can do and stop criticizing other people. I don’t know Hilary and I’m sure she’s a wonderful woman but she really shouldn’t do that.”

Well, if anything, this settles a 20 year old mystery. George H. W. Bush didn’t understand price scanners not because he was out of touch, just because Barbara did the shopping.

But Kelly was right to call Bush “everybody’s grandmother” because her chastising of Rosen was perfectly grandmotherly. If I had to sum up the sentiment here I would say, “Hillary, Nana Bush isn’t angry. She’s just disappointed.”

However, there’s clearly no disappointment in the Republican party. Not to return to my crude visual image, but I think we’re going to get into a sensitive men’s health issue soon. I mean, it’s got to be dangerous when the RNC has that much blood leaving their heads and going south. Oh well. It’s better than none at all.

*I don’t have the exact figures but I wouldn’t be surprised if the entire cast of The Five combined doesn’t have that much Fox screen time.

**I use “working” in a paycheck sense. Please don’t come after me, Republicans. I could stand to lose some weight but I’d prefer to lose a pound of flesh in a gym setting.