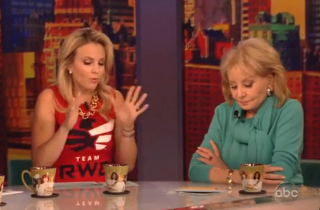 On The View this morning, Elisabeth Hasselbeck suggested that the timing of Gen. David Petraeus‘ resignation was a little “fishy,” prompting co-host Barbara Walters to interrupt her in a bit of a heated moment.

Hasselbeck explained that she’s heard a lot of conspiracy theories suggesting Petraeus resigned in order to avoid testifying about the September 11th attacks on a U.S. consulate in Benghazi.

“There are a ton of conspiracy theories out there right now,” Hasselbeck said. “One is that this is a Benghazi cover-up and [the Obama administration didn’t want Petraeus to testify.”

As her co-hosts groaned in response (Joy Behar let out an “Oh, God!”), Hasselbeck continued: “I’m just saying what’s out there. Is the timing fishy? Sure…”

“No, I don’t think it’s fishy,” Walters interrupted her co-host.

“Regardless, we don’t know if this is — we don’t have the details,” Hasselbeck explained. “What we do know — and, in fact, what I feel most sad about — is that on the weekend of Veterans Day, this is ironically what we’re talking about.”

“A man who served our nation in a way probably none of us every could have, possibly a fall from grace, but now we’re not talking about the veterans in our country that need us the most,” she continued before asking viewers to go to the show’s website to contribute to helping veterans.

“Of course we should,” an irritated Walters interrupted. “But one thing has nothing to do with the other.”

Watch the exchange below, via ABC: