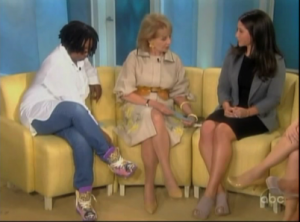 Although it may seem like Bristol Palin has been talking about losing her virginity to Levi Johnston doing publicity for her new book forever, she isn’t quite done yet. However, after this interview with Barbara Walters and the ladies of the The View, Palin might be considering heading back to Alaska because things are really starting to get awkward.

Walters first addresses the already much discussed issue of Palin’s intoxication when she lost her virginity. Palin once again asserts that she wasn’t raped, sticking to what has almost become a script for her book tour. But then Walters dives into her most awkward statement: “it must have been okay then, because you kept having sex with him”. Gah! Palin doesn’t falter though, saying, “we did it that one night and I just figured you know, if I did it once I guess it’s okay to do it again because I’d already broken my moral code.”

She then goes on to say that she will not have sex again before marriage, to which Walters counters with “so let’s say there’s no one you’re really crazy about until you’re 30” to which Palin obviously says she’ll wait for that special someone.

As someone who is closer to Palin’s age than Walters’, I can’t help but find this segment pretty cringe worthy. It’s like your Grandma asking you about sex! My insides are curling up in shame just thinking about being in Bristol’s place. But Palin handles herself pretty well and is actually relatable. Who hasn’t endured an awkward sex talk? At least most of us haven’t had to deal with the humiliation of doing so on live television.

Check out every seat shiftingly uncomfortable moment below: