Barbara Walters Asks Candy Crowley: ‘Were You Too Pushy’ During Debate?
video

Barbara Walters Asks Candy Crowley: ‘Were You Too Pushy’ During Debate? 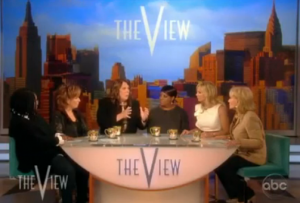 On Wednesday, Candy Crowley joined the ladies of The View to discuss last night’s presidential debate — and some of the backlash she’s faced since. Defending her moderating, Crowley argued against any charges of bias.

One point of contention has been Crowley interjecting to correct Mitt Romney‘s comment about when President Barack Obama called the Libya attack a terrorist act. Her remark elicited a “Can you say that louder, Candy?” from the president — and ire from many conservatives.

Crowley defended herself saying that right after that remark, she did turn to Romney and point out that his argument about the bigger picture was correct. “I was trying to move the conversation along,” she said.

Elisabeth Hasselbeck asked whether Crowley felt pressure after the president’s remark, and Crowley said, “I had flashbacks to when my children were young” (referring to how they were looking at her).

Crowley also said that while she had an earpiece in, she didn’t have a fact-checker or any sort feeding her information. She’d heard Obama’s remarks in the Rose Garden, Crowley said, and brought them up from memory.

“How hard is it to remain truly moderate?” Hasselbeck asked, noting that some thought Crowley revealed her bias when she interjected in the Libya discussion. “I’d say listen to thing I said right after that,” Crowley said, noting again that she affirmed Romney.

Addressing Whoopi Goldberg‘s question, Crowley said the candidates did not come across as heated, or overly aggressive. At that point, Joy Behar chimed in, observing that some people felt Crowley was too pushy. “Were you too pushy?” she asked.

“I love the term pushy,” Crowley replied. “I didn’t think I was too pushy. I think I was trying to get — Look, I was kind of the advocate for the 80 people sitting up here. I was trying to get their question answered, which required me to say, ‘I don’t know why we’re talking about Chinese currency because I thought it was about assault weapons.’ And to try to get in as many as I could.”

Concluding the segment, Barbara Walters showered Crowley with praise. Noting how much multi-tasking goes into the job, Walters said, “My hats off to you,” and shook her hand.